Alex Murdaugh, the South Carolina lawyer whose wife and son were killed in June, turns himself in on charges relateŌĆtwitter.com/i/web/status/1ŌĆ”h0 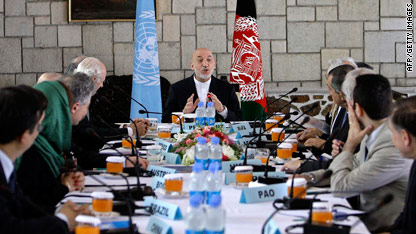 A look at some of the top stories on national security, terrorism and intelligence this afternoon:

Militants removed from watch list - The United Nations will remove Taliban militants not tied to al Qaeda from a terror blacklist in a "step-by-step" fashion, the Afghan president's office said on Tuesday. U.N. Security Council Resolution 1267 freezes the assets of individuals with links to the Taliban, as well as al Qaeda, but at the recent peace jirga called by President Hamid Karzai there were calls for the blacklist to be revised. Several of those on the list are former Taliban officials who now serve in parliament.

Karzai met a 15-member committee of the UN Security Council Tuesday and requested they "remove names of those Taliban who are not linked to Al-Qaeda", the president's office said. In another move toward reconciliation, Dr. Mohammad Zasim Hashimzai, Afghanistan's deputy minister of justice and legal affairs, said more than 25 prisoners have been freed in a move to get militants to lay down their arms.

TTP deemed ŌĆśterrorist organizationŌĆÖ –– The U.S. State Department says it intends to designate the Pakistani Taliban (TTP) as a "foreign terrorist organization" after the suspect charged in the failed Times Square bombing admitted to being trained by the group, two senior officials tell CNN. Federal law allows groups to be added to the list following a decision by the secretary of state, in consultation with the attorney general and the secretary of the Treasury. It is unlawful for a person in the United States to knowingly provide "material support or resources" to a designated FTO. There are nearly fifty FTOŌĆÖs already on the State DepartmentŌĆÖs list.

Senior Taliban figure detained – An Afghan-international security force detained a senior Taliban figure in an overnight raid in Helmand province, according to the International Security Assistance Force. The unnamed man was described as the Taliban's chief of finance for Baghlan Province. The Taliban finance chief is also an expert on improvised explosive devices (IEDs), ISAF said, and is former district commander of at least three insurgent cells.

ISAF has launched a campaign to track and detain midlevel Taliban operatives in southern Afghanistan as it prepares a ŌĆ£rolling operationŌĆØ to reduce Taliban influence in and around Kandahar. But the Taliban has struck back with a series of assassinations of Afghan officials and tribal chiefs.

The House Oversight Committee is holding a hearing Tuesday about the role of trucking companies and contractors resupplying U.S. forces in Afghanistan. Tierney said a six-month investigation had revealed the ŌĆ£systematic failureŌĆØ of supervision of the supply chain, and institutionalized reliance on contractors. ŌĆ£Not only does the system run afoul of the [Defense] Department's own rules and regulations mandated by Congress, it also appears to risk undermining the U.S. strategy for achieving its goals in AfghanistanŌĆØ Tierney said.

The government of Philippines President Rodrigo Duterte said it will not cooperate with an International Criminal CŌĆtwitter.com/i/web/status/1ŌĆ”PS
cnni

11:45 am ET September 17, 2021 RETWEET
Passengers and cargo will soon be able to shoot through the Egyptian desert aboard a high-speed train, in a first fŌĆtwitter.com/i/web/status/1ŌĆ”ti
cnni

11:18 am ET September 17, 2021 RETWEET
The President announces a goal with the EU and other countries to reduce planet-warming emissions by nearly 30% byŌĆtwitter.com/i/web/status/1ŌĆ”4d
CNNweather

11:00 am ET September 17, 2021 RETWEET
The will of Prince Philip, the late husband of Britain's Queen Elizabeth, will be sealed and remain private for atŌĆtwitter.com/i/web/status/1ŌĆ”p7
cnni