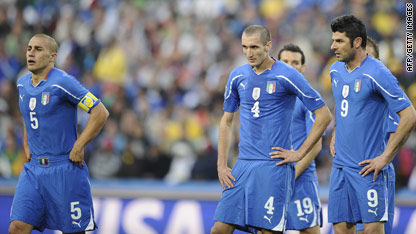 The Azzurri followed 2006 runners-up France in making a first-round exit despite a frantic finale in which they had a goal disallowed.

Slovakia progressed into the last 16 along with Paraguay, who topped Group F despite a 0-0 draw with New Zealand.

The Kiwis were knocked out of the tournament despite finishing unbeaten with three draws - a sharp contrast to their only other finals appearance in 1982 which ended with three defeats.