Karl Eikenberry, the U.S. ambassador to Afghanistan, said Gen. Stanley McChrystal apologized to him for disparaging remarks in a Rolling Stone article about Eikenberry and other officials.

"He very graciously gave me a call and apologized," Eikenberry told reporters in remarks to reporters on Thursday. Eikenberry said he hadn't read the article but heard about some of the things in it.

McChrystal resigned from his post as commander of the NATO-led forces in Afghanistan over his remarks.

"Troops from the 46 nations of ISAF have made substantial security gains in recent months. While we face a tough summer ahead, strong leadership, the focus of the soldiers on the ground and our partnership with Afghan security forces, will ensure that we defeat an insurgency that has brought so much suffering to Afghanistan."

Here's a look at what's streaming live on http://www.CNN.com/live

10:00 a.m. – Cybersecurity/Dr. Phil hearing- A House Education subcommittee will hold a hearing to examine rising safety concerns about students using the Internet, social networking and other technology. Television talk show host Dr. Phil McGraw will be among the witnesses.

END_OF_DOCUMENT_TOKEN_TO_BE_REPLACED

Obama and McChrystal - President Obama says he regrets having to accept Gen. Stanley McChrystal's resignation but felt he had no choice. The ousting of the top U.S. commander in Afghanistan came after publication of a Rolling Stone magazine article in which McChrystal and his staff appeared to disparage decisions from Washington. Gen. David Petraeus, commander of U.S. Central Command, will take over in Afghanistan. CNN takes a look at what happened in Wednesday's meeting between Obama and McChrystal and evaluates what the implications may be for the war in Afghanistan.

END_OF_DOCUMENT_TOKEN_TO_BE_REPLACED 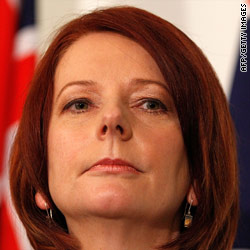 Gillard said she was aware that the move makes her the nation's first woman prime minister, "and maybe the first redhead," but added, "I didn't set out to crash my head on any glass ceilings; I set out to keep my feet on the floor."

Gillard said she would work to harness wind and solar energy and to pursue putting a price on carbon emissions, but said she would not address the latter goal - which her predecessor had been unable to achieve - until after a general election.

Gillard said she would also pursue increasing taxes on mining companies, another issue that has stirred controversy and fierce opposition from the industry. "Australians are entitled to a fairer share of our inheritance of the mineral wealth that lies in our grounds," she said.

Born in Wales, she moved with her parents to Australia when she was a child. After studying law, she was elected to the House of Representatives for Lalor, Victoria, in 1998, 2001, 2004 and 2007 before joining Rudd as deputy prime minister.

"Julia's unique, hard-working, passionate, driven by noble ideals and wants to do good things for the country," John Gillard told Seven Network Australia about his daughter.

END_OF_DOCUMENT_TOKEN_TO_BE_REPLACED

Donovan: United States can beat anyone at World Cup

American striker Landon Donovan told CNN the U.S. can "beat anyone" after his injury-time goal helped the side qualify from the group stages of the 2010 World Cup on Wednesday.

Donovan, who plays for Major League Soccer side the Los Angeles Galaxy, struck with only seconds left of the game to seal a 1-0 win over Algeria and put the U.S. top of Group C above fellow last-16 qualifiers England.

The Americans will now face Ghana, who finished second in Group D, on Saturday in Rustenburg in a last-16 knockout game.

"We believe we can beat any team in this tournament. Given our experiences from last year [at the Confederations Cup] we think we can do really big things, we're going to go for it," the 28-year-old told CNN.

END_OF_DOCUMENT_TOKEN_TO_BE_REPLACED

At least 8 dead, 25 wounded in fighting in Somalia 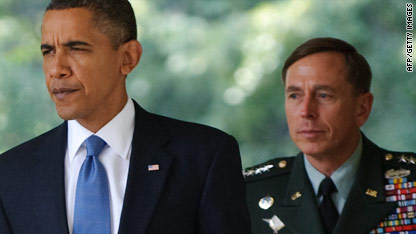 The morning after the day before - and General David Petraeus is packing his bags to relocate to Kabul, and take over the job his subordinate, General Stanley McChrystal was doing until Wednesday.

First there is the formality of Congressional approval, likely next week. But the General is likely to be questioned closely on the terms and speed of the withdrawal of US troops from Afghanistan. Last week, he appeared to be lukewarm both about the deadline set by President Obama (of July 2011) - describing it as "the date when a process begins based on conditions, not the date when the U.S. heads for the exits."

To clarify the terms of the debate, the Chairman of Senate Armed Services Committee, Senator Carl Levin, said Wednesday that he had spoken with Petraeus, who had agreed that "a conditions-based withdrawal referred to how it will happen, rather than if it will begin." It may seem a fine debating point, but it isn't. END_OF_DOCUMENT_TOKEN_TO_BE_REPLACED

END_OF_DOCUMENT_TOKEN_TO_BE_REPLACED

The death toll from severe flooding in two states in northeastern Brazil has grown to 44, with more than 600 people still missing, the government-run news agency reported.

END_OF_DOCUMENT_TOKEN_TO_BE_REPLACED

A senior Pentagon official confirms to CNN that Defense Secretary Robert Gates advocated to President Obama keeping General Stanley McChrystal on the job because he was vital to the war effort. Gates was overruled. The official has direct knowledge of events, but declined to be identified because it involves internal administration discussions.

Train tragedy - At least 12 people were killed and 14 injured by a train in a town south of Barcelona, Spain. The accident happened as a group tried to cross the tracks after getting off a local train in the town of Castelldefels. Many were heading to the Fiesta de San Juan, which celebrates the year's shortest night. Read the full story

END_OF_DOCUMENT_TOKEN_TO_BE_REPLACED

Five Americans arrested on terror charges in Pakistan have been sentenced to 15 years each, the deputy prosecutor said Thursday.