After win in marathon match, Isner bounced in 75 minutes 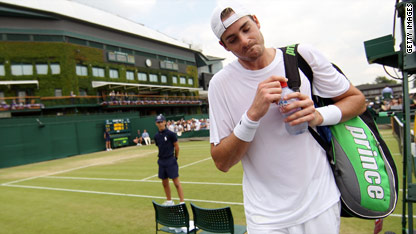 John Isner leaves after losing in straight sets Friday at Wimbledon in the second round.

This week at Wimbledon John Isner was known as the man who won the longest match in tennis history, one that took 11 hours and five minutes over three days to finish.

On Friday, Isner was on the court again for his second-round match. But this time, he seemed out of gas, and was knocked out in 75 minutes.

Isner, who fought hard in his marathon match against Nicolas Mahut for three days, received an extremely warm reception from the crowd at the start of his match Friday, but he never got his momentum going.

He required his trainer's attention during the game - the first sign that things might not go his way.

Perhaps the adrenaline was gone, and his body had finally given out. Some tennis watchers online say his long match with Mahut likely put him at a disadvantage Friday, wondering how he could bounce back after such a grueling duel.

Or perhaps, his game just didn't show up Friday.

Either way, after capturing the attention of the world during one tennis match, just like that, Isner was now out of the entire tournament.