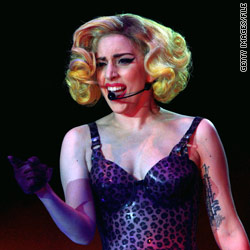 The recording artist - born Stefani Joanne Angelina Germanotta in 1986 - and President Obama are the top competitors in a popularity contest that could have one of them setting a record by this weekend. Facebook publicists told CNN on Thursday that the pop star and the president are neck and neck in the race to become the first living person with more than 10 million fans on the social- networking site.

Obama's page, which is run by the group Organizing for America, includes photographs of his recent Gulf Coast visit and links to speeches from news conferences. Lady Gaga's page lists upcoming concerts and includes a biographical article describing how the 24-year-old pop star, who played piano by ear as a toddler, grew into a theatrical performer who wows the masses with flashy performances in international concert tours. "I'm just trying to change the world one sequin at a time," she says in the posted story.

The University of Minnesota graduate student in the Department of History created the syllabus for the course â€śOil and Water: The Gulf Oil Spill of 2010.â€ť The Minnesota Daily reports that the course, which Gilmer will begin teaching this fall on the St. Paul campus, will cover the history and ecology of the Gulf region, the landscape of the Louisiana economy and the impact of past oil disasters on people and the environment.

Gilmer told CNN on Thursday that heâ€™s likely to adjust the course based on news events. â€śItâ€™s too early from an historical perspective to understand what the impact of the spill will be. But it has the potential to shape the environment of the Gulf for years or decades to come," he said. "It also may impact everything -Â from the food people across the country eat to the ways we produce and use energy.â€ť

Thereâ€™s no textbook, but GilmerÂ said there will be lots for his students to read - news and academic articles and excerpts from books. He said that he knows Mike Tidwellâ€™s â€śBayou Farewell: The Rich Life and Tragic Death of Louisiana's Cajun Coastâ€ť will definitely be on the list.

The author of â€śBayou Farewell: The Rich Life and Tragic Death of Louisiana's Cajun Coastâ€ť told CNN on Thursday that heâ€™s been to Louisiana twice since the spill, including four days touringÂ affected coastal areas. He said, â€śIâ€™ve flown over parts of the spill in a seaplane. Iâ€™ve been out in the oiled marshes in the crab boat of an out-of-work Louisiana crabber.â€ť

Â Tidwell said his book, which he said predicted in detail the Katrina hurricane disaster in 2003, will be reissued in August with a new introduction on the BP blowout tragedy. Tidwell, the founder and director of the Chesapeake Climate Action Network, said the BP disaster likely will have a bigger impact on coastal people than even Katrina did in terms of its economic and cultural disruptions.

â€śWe need to make sure that impacted people are sufficiently compensated financially so that they can survive economically until normal times return,â€ť he said. â€ťThe shrimpers, for example, need to be able to hang on for a year or two.â€ť

The owner of Tov Pizza - â€śBaltimoreâ€™s Best Kosher Pizzaâ€ť - is helping disgraced lobbyist Jack Abramoff get a fresh start, one slice at a time.

Once a high-rolling Republican insider, Abramoff pleaded guilty to a raft of federal corruption charges in 2006. He admitted illegally showering gifts on officials who provided favors for his clients and agreed to cooperate with prosecutors. Among other things, the inquiry led to prison time for a former congressman, Ohio Republican Bob Ney; for Steven Griles, once the Bush administration's deputy interior secretary; and for several former congressional staffers.

The Baltimore Jewish Times reports that Abramoff himself served some 43 months in prison, now lives in a halfway house and will likely work at Tov for six months.

Rosenbluth told the newspaper that he was gratified that Tov Pizza could be the place where Abramoff begins his healing journey back. â€śWeâ€™re all Jews, weâ€™re all on the same team,â€ť Rosenbluth said. â€śIâ€™m more than happy to help a fellow Jew in any way I can.â€ť

The iconic New York journalist says that he will finally graduate from high schoolÂ - Â just two days after turning 75. The New York Times reports that Hamill left Regis High School in 1951 as a sophomore.

"It was one of those dumb things you do," he told the Times. "I had convinced myself, full of 16-year-old melancholy, that it was the only thing I could do. And it was dumb. But it forced me to live the kind of life I lived."

Hamill worked in the Brooklyn Navy Yard, later joined the Navy and studied art in Mexico. After a stint as an ad copy writer, he became a New York Post reporter in 1960. He has written countless columns and 16 novels and nonfiction books. According to the New York Daily News, Hamill also found the time to date Jackie Kennedy, Linda Ronstadt and Shirley MacLaine.

On Saturday, he will receive an honorary diploma from the Jesuit-run school. HamillÂ told the TimesÂ he would never encourage anyone to follow his path, but has few regrets. "I did feel I was the best Pete Hamill that ever lived."

On an exoplanet called GJ 367 b that's orbiting a star 31 light-years away from our sun, a year only lasts for abouâ€twitter.com/i/web/status/1â€¦kz
cnni

4:52 pm ET December 2, 2021 RETWEET
The saying â€śshot himself in the footâ€ť is literal in this case.
sarasidnerCNN