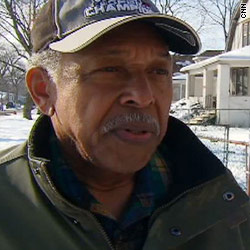 The 76-year-old retired custodian asked the U.S. Supreme Court to overturn a 1982 municipal handgun ban so that he can protect himself in his inner-city Chicago home. On Monday, the high court ruled unconstitutional the Illinois city's ban on handgun
ownership, a potentially far-reaching case over the ability of state and local governments to enforce limits on weapons.

McDonald told the Chicago Tribune that he has lived in the same area of Chicago for 38 years. After thugs broke into his house three times, McDonald said he used his own hunting rifle to chase them away. In 2005, when Illinois lawmakers considered an assault-rifle ban, McDonald attended a gun rally.

"I was the only black guy that I saw," McDonald told the AARP Bulletin.

At the rally, he met Alan Gura, the attorney who helped to overturn Washington, D.C.'s handgun ban. Gura persuaded McDonald to become the main face of the Chicago lawsuit.

"It doesn't matter what anyone's motives were for picking me for this," McDonald told AARP. "I have my own motives, and they are so compelling and so heavy that to me this is worthy of my effort."

The Chicago law has been shown to reduce crime, according to gun-control advocates. Chicago Mayor Richard Daley is a powerful supporter of the ban.

"Maybe he could come there and spend the night, especially during the summer, and listen to what I listen to out my window," McDonald said. "Maybe he would understand where I'm coming from."

AARP: Chicago man stands up for right to bear arms

While top White House officials have expressed confidence that Supreme Court nominee Elena Kagan will earn the respect and votes of senators during her confirmation hearings, which begin Monday, President Obama's choice for the highest court faces skepticism from both conservatives and liberals.

Warren, executive director of the Center for Constitutional Rights, issued a statement in May explaining that his nonprofit organization has fought "the dangerous growth of executive power, particularly as it concerns torture, detention, surveillance and racial profiling, areas where the government has flouted the law most blatantly over the last decade. I am sad to say that Solicitor General Elena Kagan's record indicates a troubling support for expanding presidential powers, something we must be vigilant about at this time. President Obama would appear to be seeking to appoint a Supreme Court judge who will endorse his policies and appease conservatives."

For seven years, Warren was a national senior staff attorney with the American Civil Liberties Union. He is known as a leading African-American voice for affirmative action.

One of the world's foremost experts on terrorism and post-traumatic stress disorder says one of the reasons she has succeeded in her field is because of a sexual assault that she faced as an adolescent.

"Why was I so interested in violence?" Stern says. "I realize now that I was trying to understand violent men, because I had been a victim of violence."

A Harvard-trained former National Security Council policy director, Stern told the Chronicle of Higher Education that she began confronting her own painful past in 2006 when she requested a copy of her 33-year-old police file.

On the night of October 1, 1973, Stern - 15 at the time - and her 14-year-old sister were home alone in Concord, Massachusetts, when a man armed with a gun raped them. Stern's investigation into what happened to the serial child rapist and the impact that the crime had on her life is the subject of her new book, "Denial, A Memoir of Terror."

Stern, who has traveled the world interviewing terrorists, was the model for the title character played by Nicole Kidman in the 1997 movie, "The Peacemaker."

The president of the United Farm Workers of America is challenging people who complain that undocumented immigrants are taking jobs away from U.S. citizens to do something about it.

The Texas Tribune reports that the UFW is launching a "Take Our Jobs" campaign, inviting citizens and legal residents to replace immigrants in the field. The campaign is encouraging members of Congress to refer their constituents to vacant farm worker positions in locations across the country. The union promises that experienced farm workers will train new recruits.

Rodriguez told the newspaper that he doesn't expect many citizens to take the offer seriously, because many workers earn about half of what nonfarm jobs pay. Instead, Rodriguez says, the UFW is more focused on drawing attention away from a deportation-only approach to immigration, which he said would decimate the agriculture industry.

"Somehow, undocumented workers are getting as much blame for our economic troubles as Wall Street, but missing from the immigration debate is an honest recognition that the food we all eat at home, in restaurants and workplace cafeterias, including those in the Capitol, comes to us from the labor of undocumented workers," Rodriguez said.

The 44-year-old candidate for South Carolina's 1st Congressional District, who defeated the son of the late Sen, Strom Thurmond in last Tuesday's GOP primary, could become the only African-American Republican on Capitol Hill.

The New York Times reports that Scott, a businessman who served 14 years in county government, was a poor high school student. But a man named John Moniz, the owner of the Chick-fil-A restaurant next to the movie theater where Scott sold popcorn, introduced him to what he describes as a conservative, Christian point of view.

After his mentor died at age 38, the newspaper reports, Scott, then 17, created a "mission statement" for his life: Before he dies, he would have a positive effect on the lives of 1 billion people.

"To know my story is to understand that there were people who had no reason to step up to the plate and help me, but who did," Scott said. "I want to serve the community because the community helped me."

According to the Times, Scott believes that President Obama is driving the country toward bankruptcy and socialism.