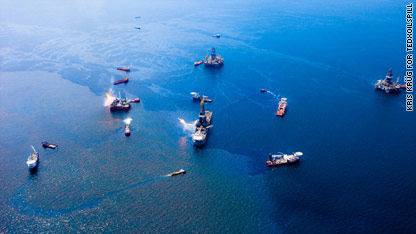 The people behind the conference hope the disaster has reminded people of the importance of the marine ecosystem.

It is day 70 of the Gulf oil crisis. Millions of words and thousands of hours of video have been devoted to the explosion at BP's Deepwater Horizon rig and the gushing of oil into the Gulf of Mexico.

And yet the organizers of a conference in Washington Monday think that there's actually a shortage of information about the disaster. The two technology entrepreneurs behind the conference, TEDx OilSpill, are hoping the event will start to fix that problem.

â€śThereâ€™s sort of this void right now with information coming out of the Gulf,â€ť says Nate Mook. â€śSomething catastrophic has happened. Most people donâ€™t understand the underlying issues that led to this happening. Theyâ€™re really not aware of the all of the complexities behind their getting into their car and driving â€¦ itâ€™s brought to the forefront a lot of things that have been on the sidelines for a long time â€“ with our oceans, with how important the marine eco-system is, with where we are getting our energy, what are we putting at risk, and â€¦ new technologies being developed.â€ť

To answer those questions an array of speakers, from ocean explorer Sylvia Earle to energy expert Amory Lovins to â€śLeroy Stick,â€ť the anonymous creator of the fake BP Twitter (@BPGlobalPR) account with more than179,000 followers, will speak onstage at the Woolly Mammoth Theatre in Washington from 9 am to about 7 pm. The event will be streamed at: http://tedxoilspill.com/live/. And people will gather to watch the stream or discuss the issues in 125 meetups around the nation and world.

Mook and fellow Internet entrepreneur Dave Troy began organizing the conference a little more than four weeks ago. They discussed the idea with TED, a nonprofit that organizes conferences and posts videos on its website to fulfill its mission of â€śIdeas Worth Spreading.â€ť Mook said TED and other organizations enthusiastically supported the idea; (â€śTEDxâ€ť stands for an independently organized event with a license from TED.)

TED conferences began about 20 years ago, with a focus on technology, entertainment and design but the organization has widened its focus to include all sorts of subjects. Speakers who are passionate about an idea or an issue get up to 18 minutes to make their case.

Mook, 28, thinks the TED format is well suited to bringing more understanding to the Gulf crisis. â€śA lot of magic can happen when you bring people together across disciplines in one room and have them talk to each other,â€ť he says. (CNN has a content partnership with TED.)

The event will include a report from an â€śexpeditionâ€ť team that traveled to the Gulf last week, using a seaplane to get a different vantage point on the disaster.

Part of the reason for what Mook and Troy see as a â€śvoidâ€ť of information about the crisis is that the Obama administration and BP each have reasons to be reticent. The Justice Department is conducting a criminal investigation, a factor thatâ€™s likely to make people in government and at the company extremely reluctant to speak about the crisis.

The organizers reached out to people in the White House and a number of cabinet departments but couldnâ€™t get a decision maker from the government to appear. â€śItâ€™s potentially too dangerous for them because they canâ€™t control the message,â€ť said Mook. BP was similarly unresponsive, he said.

And maybe itâ€™s just as well that the two antagonists in the drama wonâ€™t appear. â€śPeople are doing a very good job of looking back at this and not doing a very good job of looking forward,â€ť said Dave Troy, a 38-year-old based in Baltimore who founded TEDx MidAtlantic. â€śPeople are very much interested in doing something to actually solve these problems instead of figuring out whose fault this is.â€ť

With Bennifer 2.0 on the scene, we look back at J.Loâ€™s 2002 engagement ring.cnn.it/2WGVJsrdy
cnni

10:35 am ET July 31, 2021 RETWEET
The Marble Arch Mound in London has opened to a fanfare of publicity -- but visitors say it is an unfinished, holloâ€twitter.com/i/web/status/1â€¦v2
cnni

9:22 am ET July 31, 2021 RETWEET
Mudslides shut down a major interstate in Colorado on Friday stranding over 100 motorists. cnn.it/3lh1CXC https://t.co/mEPLYuMP2P
CNNweather