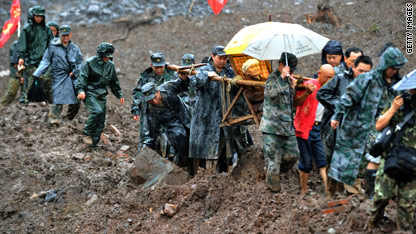 Two of the eight were children.

About 500 rescuers cleared a road leading to a site where 94 people were still missing. They used heavy backhoes to clear debris but heavy rain and treacherous terrain hampered their efforts, Xinhua news agency reported.

Villager Cen Chaoyang was tending to his pigs when he heard rocks and mud barreling down the hill, he told state-run CCTV.

"The only thing I know is that landslides swallowed the village, he said. "My wife was buried under the debris."

Another villager, Zhuo Guangchao, said the landslide was like "an explosion."

"I heard something roaring behind me, and I rushed out. Rocks and mud were rumbling down the hill, and pouring into our village," he said.

Rescuers had to run three miles to reach the site, which is not accessible by vehicles.