Dontae Morris, 24, is accused of shooting Officers Jeffrey Kocab and David Curtis during an early-morning traffic stop Tuesday near downtown Tampa. The officers, both 31, later died at a hospital.

Morris, an ex-convict who was released from prison in April,┬Āturned himself in through a┬Āthird party, Police Chief Jane Castor said in a press conference Friday.

Another woman was also┬Āarrested Friday night and charged federally with witnessing a felony and not reporting it, Castor said.

Oakland braces for possible riots: Jurors wrapped up deliberations Friday and will continue next week in the racially charged trial of a white former police officer accused of murdering┬Āa black man.

END_OF_DOCUMENT_TOKEN_TO_BE_REPLACED

[Updated at 8:00 p.m.] A drug charge has been dropped against Paris Hilton, who was detained Friday in South Africa on suspicion of marijuana possession, police said.

Paris Hilton appeared in a South African magistrate court Friday after
being detained earlier in the day on allegations of possessing marijuana, CNN affiliate ETV reported.

A look at the day's business headlines:

The Dow and Nasdaq ended at fresh 8-month lows and the S&P 500 at 9-month lows.┬ĀStocks slid through most of the day as investors digested the jobs report ahead of a long holiday weekend. All U.S. financial markets are closed Monday in observance of Independence Day.┬Ā

END_OF_DOCUMENT_TOKEN_TO_BE_REPLACED

[Posted at 1:31 p.m.] President Barack Obama told the people of West Virginia that the entire United States shares in their loss with the death of Sen. Robert Byrd.

"He was a Senate icon," Obama said. "And he was my friend. That's how I'll remember him. Today we remember the path he climbed to such extraordinary peaks."

"Giving you hope, he said, was his greatest achievement," Obama said. "Hope through roads and research centers, schools..."

Obama spoke of Byrd's knowing that life was marked with your weaknesses and strengths, sins and truths and successes and failures.

Biden said it couldn't have been more fitting for Byrd to lie in repose inside the Senate chambers, instead of in the rotunda.

"That was his cathedral," Biden said.

Biden remembered Byrd as the "fiercest" defender of his state and the people's way of life and a man who he never called "Senator," but instead "Leader."

END_OF_DOCUMENT_TOKEN_TO_BE_REPLACED

Would the spirit of the Declaration of Independence have been any different if it referred to Americans as "subjects" instead of "citizens?"

Thomas Jefferson apparently thought so, and recent analysis of a rough draft of the Declaration has confirmed speculation that he considered both before settling on "citizens."

Recent hyperspectral imaging by scientists in the Library of Congress' Preservation Research and Testing Division performed on JeffersonŌĆÖs rough draft shows he originally wrote the phrase "our fellow subjects." But he apparently changed his mind and┬Āheavily scrawled over the word "subjects" was┬Āthe word "citizens."

END_OF_DOCUMENT_TOKEN_TO_BE_REPLACED

Russian spying suspects known as Michael Zottoli and Patricia Mills have told investigators that those are not their real identities, according to court documents. 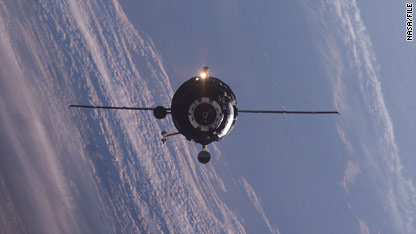 An unpiloted Progress supply vehicle approaches the International Space Station on a previous mission in 2005.

An unmanned cargo spacecraft has failed to dock with the International Space Station, said Lynette Madison of NASA Friday.

The Progress cargo vessel, a resupply craft, was trying to dock with the space station when a technical problem occurred about 20 minutes before the scheduled docking time, she said.

The vessel flew about two miles past the space station.

"This is kind of a fluke event," she said. "We normally don't have any problems with Progress dockings. We dock those every few months. So this is an unusual event."

Six people aboard the space station - three Americans and three Russians - are not in danger, Madison said.

Engineers with the Russian Space Agency will try to dock the vehicle again, but they do not plan to try that on Friday, she said. They have "some" control of the vehicle, she said.

The craft launched Wednesday from the Baikonur Space Center in Kazakhstan, the state-run RIA-Novosti news agency of Russia said.

It planned to deliver "fuel, oxygen, scientific equipment and video and photo equipment" to the space station along with food, water and personal items for crew members, the news agency said.

Progress re-supply vehicles typically deliver supplies to the space station and haul away trash, burning up on re-entry.

Chemical dispersants keep flowing into the Gulf of Mexico at virtually unchanged levels despite the Environmental Protection Agency's order to BP to "significantly" scale back, according to a CNN analysis of daily dispersant reports provided by the Deepwater Horizon Unified Command.

When the May 26 directive was issued, EPA Administrator Lisa Jackson said dispersant use should be cut by 75 percent.

END_OF_DOCUMENT_TOKEN_TO_BE_REPLACED

How to beat Moscow traffic: Buy a helicopter 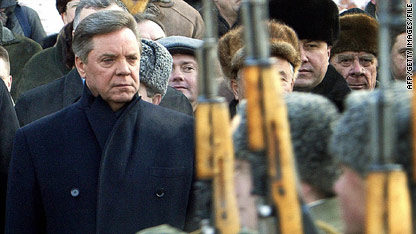 MoscowŌĆÖs regional governor offered an unusual - and blithe - solution on Friday to the Russian capitalŌĆÖs massive traffic jams: get a helicopter.

ŌĆ£I travel in a helicopter,ŌĆØ Boris Gromov told journalists, the RIA Novosti news agency reported. ŌĆ£You should also buy helicopters instead of cars - then you will not need roads.ŌĆØ

HeŌĆÖs not the only one flying. About 400 Moscow region residents own helicopters, Gromov said.

Repair work has caused unprecedented holdups on the Leningradskoye Highway, one of the main traffic arteries to the northwest of Moscow.

The jams are so bad that about 1,500 people miss their flights from Sheremetyevo International Airport every day, according to RIA Novosti. And itŌĆÖs not just commuters who are complaining. RussiaŌĆÖs state-run air carrier Aeroflot said it is losing an average of 400,000 euros per day over the traffic jams on the Leningradskoye Highway, the companyŌĆÖs deputy director-general, Andrei Kalmykov, told the Itar-Tass news agency Thursday.

RussiaŌĆÖs transport head on Thursday said the jams are here to stay. "I am sure that - fortunately or unfortunately - traffic jams in Moscow will not disappear because they are a result of Moscow's activity," Vasily Kichedzhi, head of the transportation and communication department, told RIA Novosti.

Then again, GormovŌĆÖs solution might not be that unreasonable.

WhatŌĆÖs your worst traffic jam ever, and what do you do to beat these tie-ups? Let us know in the comments below.

Military veterans are being denied health care due to "inappropriate scheduling practices" at VA facilities, according to an internal memo from the Department of Veterans Affairs.

END_OF_DOCUMENT_TOKEN_TO_BE_REPLACED

A man wanted in Hungary for the torture and killing of a Jewish teenager during World War II averted extradition Friday after an Australian federal court ruled in his favor, the an Australian news agency reported.

END_OF_DOCUMENT_TOKEN_TO_BE_REPLACED

Gen. David Petraeus, the new U.S. commander in Afghanistan, has arrived at NATO headquarters in Kabul, the military said Friday.

Selebi will face 15 years in prison when he is sentenced July 14.

END_OF_DOCUMENT_TOKEN_TO_BE_REPLACED

A cap meant to capture oil gushing from BP's ruptured undersea well appeared to be bouncing in the water Friday, moving more freely than it has in the past.

The implication is that less oil is being captured, said Steven Wereley, a member of the Flow Rate Technical Group, which is meant to provide scientifically sound information about how much oil is spilling into the Gulf of Mexico.

High winds account for the cap's "wobble," said Mark Proegler, a BP spokesman. He noted that forecasters expect rough seas to calm a bit this weekend.

Mexican authorities have arrested a drug gang suspect accused of planning the shooting deaths in March of three people connected with the U.S. consulate in Ciudad Juarez and participating in the killings of 13 teens at a party in the city a month earlier, federal police said Friday.

The 13 dead people at the January party were mistakenly believed to belong to a rival drug gang, Pequeno said.

Gulf oil disaster - Now that former Hurricane Alex has lost nearly all┬Āits punch, many in the Gulf Coast states are hoping that cleanup efforts will resume Friday for the massive oil spill. The dangerous storm had created choppy seas in the Gulf of Mexico and caused hundreds of oil skimmers to be docked.

Memorial for Byrd - President┬ĀObama and Vice President Joe Biden are among the mourners who plan to attend a memorial service Friday in West Virginia for Sen. Robert Byrd, a nine-term Democrat. The memorial service is scheduled to start at 11:30 a.m. ET.┬Ā

Byrd's body arrived Thursday at the U.S. Capitol┬Āto lie in repose in the Senate chamber, a rare honor for a man who rose from the poverty of Depression-era West Virginia to become the longest-serving member of Congress. He died Monday at age 92.

END_OF_DOCUMENT_TOKEN_TO_BE_REPLACED

The U.S. economy lost 125,000 jobs in June, the Labor Department said Friday, but the unemployment rate declined to 9.5 percent.

It was the lowest unemployment rate since July 2009, when the figure was 9.4 percent. 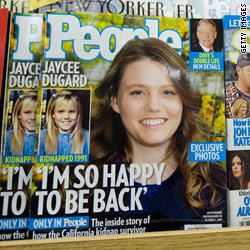 The California Assembly on Thursday passed a bill appropriating $20 million to the kidnapping victim to settle her claims against the state Department of Corrections and Rehabilitation, according to the chief clerk's office.

Dugard vanished in 1991 at the age of 11. She was found in August 2009, living in a shed in the Antioch, California, backyard of Phillip Garrido, a registered sex offender who had been on parole since January 1988. Investigators said Garrido fathered two children with Dugard during her captivity.

He and his wife, Nancy, are charged with 29 felony counts in the case. Both have pleaded not guilty.

In a report issued in November, the state inspector general's office found the Department of Corrections and Rehabilitation failed to┬Ākeep tabs on Garrido properly or properly supervise the officers assigned to his case.

According to CNN affiliate KCRA-TV in Sacramento, corrections officials entered into the settlement with Dugard, now 30. The settlement process was "pretty much unprecedented," said Jeff Long, spokesman for Assemblyman Felipe Fuentes, who sponsored the bill.

END_OF_DOCUMENT_TOKEN_TO_BE_REPLACED

Bhagavan "Doc" Antle, who appeared in the 2020 docuseries "Tiger King," and four others have been indicted on 10 coŌĆtwitter.com/i/web/status/1ŌĆ”f7
cnni

Bhagavan "Doc" Antle, who appeared in the 2020 docuseries "Tiger King," and four others have been indicted on 10 coŌĆtwitter.com/i/web/status/1ŌĆ”f7
cnni