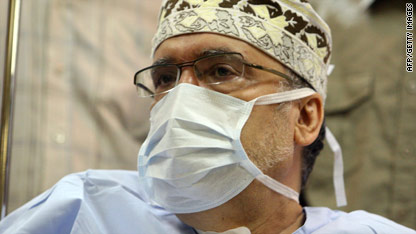 A British cancer expert who said the man convicted in the 1988 plane bombing over Scotland had about three months to live before the prisoner's release last year now says the Libyan could survive another decade or more.

Dr. Karol Sikora told The Sunday Times that Abdelbaset Ali Mohmed al Megrahi â€“ whom Scotland's government released on compassionate grounds in August after being diagnosed with prostate cancer - could live another 10 or even 20 years.

Scotland's justice secretary said last year that the decision to release the Lockerbie bomber was made after medical reports showed he had terminal cancer and perhaps three months to live.

"It's embarrassing that [al Megrahi has] gone on for so long," Sikora told The Sunday Times for a report published this week.

Al Megrahi, 58, is the only person convicted in the Pan Am Flight 103 bombing, which killed 270 people, including 189 Americans. Scotland's decision to release him on compassionate grounds was made about eight and a half years after he was sentenced to life in prison.

He was released to his native Libya, and a celebration of his homecoming there infuriated some families of the Pan Am 103 victims.

"It was clear that three months was what they were aiming for. Three months was the critical point. On the balance of probabilities, I felt I could sort of justify [that]," Sikora said, according to The Sunday Times.

The Libyan government forwarded his findings, along with those of two other experts, to Scottish authorities before Megrahi was released, The Sunday Times reported. Sikora is the only British doctor contacted by the paper to "admit to having endorsed the three-month prediction," The Sunday Times wrote.

After Scotland released al Megrahi last year, Scotland Justice Secretary Kenny MacAskill told CNN he was acting on advice from the director of health and social care for Scottish Prison Services, the prison governor and "other relevant bodies of Scotland."

Since al Megrahi's release, the British and Scottish governments have denied allegations he was let go to clear the way for British oil deals with Libya.