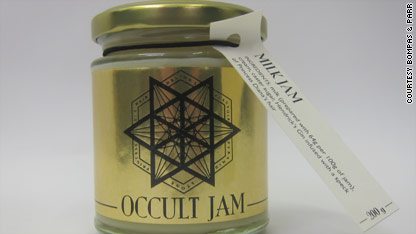 Bompas and Parr is selling milk jam, which the label touts as being infused with a speck of Princess Diana's hair.

Sam Bompas wants breakfast to be fun, a chance to start the day with food to fuel the body and stimulate the mind - and get some intriguing conversations started. What better way to do that than with a spread of Milk Jam infused with a speck of Princess Diana's hair. Yes, you read that right, Princess Di's hair.

If you're thinking that doesn't whet your appetite, he has a few alternatives: How about a jam of absinthe and pineapple with sand from the Great Pyramids or plum and oak jam with wood from the British warship The Victory, Lord Nelson's flagship at the Battle of Trafalgar.

Bompas isn't kidding about trying to sell you on jam with Lady Di's hair. But he is trying to get your attention - and is it ever working.

Word of the jam that may include the golden locks of the beloved has spread globally online - with instant reactions ranging from stomach-inducing nausea, outrage of a publicity stunt or just straight confusion. Long term, Bompas hopes the public will be appreciating his creations as works of art.

Which, ironically, is how all this got started. 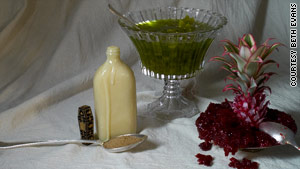 Sand from the Great Pyramids and wood from a British warship are among the ingredients in the occult jams.

Bompas, who founded Bompas and Parr in London, England with his school friend, told CNN he has worked for a long time on merging architectures, arts and food to create a "magical" and palatable experience. So when he was asked to create something for a surrealist art show at London's Barbican Art Gallery - which includes
exhibits by Salvador Dali and Rene Margritte - he too wanted to jump outside the box. Enter the "occult jams" - known for jams infused with different objects in a search for eternal life.

"We thought the most mundane food - but also magical - is jam," Bompas told CNN. "We thought there could be a way to come up with a real jam product that makes people excited about it and examine really quite how marvelous it is."

Bompas decided he wanted to push it to the limit - to see how far he could go with infusing some of the strangest objects, but also ones we can all relate to - by putting them in his jam. So he got on eBay and purchased locks of Diana's hair and got together his other ingredients to start preparations.

"We wanted the jams to have these weird and wonderful ingredients," Bompas said. "By using things like sand from Egypt, hair from Princess Diana,
if you are going to choose an odd ingredient, choose one that everyone can relate to. It can open up those conversations, and it will. Everyone can
have those conversations about how they feel about it - it's the eternal debate of what is art. What has started out as art itself has become a product with a lot of major retailers."

Perhaps Bompas has Princess Diana to thank for that, because now the founder is preparing to make the jam available through retailers worldwide, instead of just the store at the Art Gallery (where it sells for about $7 a jar). Bompas said the jams have been through all the normal testing procedures to ensure safety and shelf-life testing.

In his world, Bompas hopes people would learn to be open-minded about what they are eating, or at least just start a conversation about it. It's something he says he regularly tries to do by recreating historical events - like flooding a building with four tons of cognac to recreate an event from the 1600s. For Bompas, the idea of boating through your alcohol was a fascinating experience. One he couldn't help but try to recreate.

"I try to think - why hasn't that happened in my lifetime and then try and work to make it happen," he said.

And that's the case with the jam.

"What we'd like is to literally have people think about the foods that they put in their mouths," he said. "A lot of the things we do are history-oriented and hopefully end up quite magical and special."