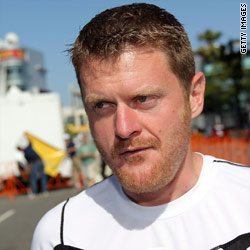 The disgraced U.S. cyclist, stripped of his Tour de France win, is the subject of a new look at allegations of doping in the sport as this year's race gets under way.

Landis' chief target of accusation is, again, seven-time champion Lance Armstrong, who steadfastly denies ever using performance-enhancing drugs or other methods such as blood doping.

The Wall Street Journal published a lengthy article Friday based on a set of interviews with Landis and other bicycle racers, offering a portrait of Armstrong that the 38-year-old riding in his last Tour is sure to resent.

"Floyd lost his credibility a long time ago," Armstrong said. "We have a person who has been under oath several times with a completely different version, written a book with a completely different version, someone that took money. He said he has no proof. It is his word versus ours. We like our word. We like where we stand and we like our credibility."

The founding president of the Los Angeles-based Media Action Network for Asian Americans has had enough. For the first time its 18-year history, the organization is urging a movie boycott, The Boston Globe reports.

At issue is M. Night Shyamalan's casting of Caucasian actors in his film adaptation of "The Last Airbender."

In the anime-style TV series that inspired the film, the lead characters appeared to be East Asian or Native American, according to the Globe.

The paper reports that Asian-American activists are angered by what they see as the latest example of a Hollywood tradition called "whitewashing" - casting white actors in roles of minority characters.

As the Senate considers and the public debates the nomination of Elena Kagan to the U.S. Supreme Court, Roth-Douquet is especially qualified to discuss the relationship between Ivy League schools and the military, including recruiting activity.

A lawyer, a former Clinton administration and Pentagon appointee, the self-described nice Jewish girl had no interest in the military until she married a Marine Corps officer.

Roth-Douquet is co-author of "AWOL: The Unexcused Absence of America's Upper Classes from Military Service - and How it Hurts Our Country."Â She also was a founder of Blue Star Families for Obama, which morphed into the nonpartisan Blue Star Families, active on military family issues. She has been among Michelle Obama's guides into the world of military families.

Roth-Douquet, herself a Princeton University grad, has written and spoken at the "Ivies" about the relationship between those schools and the military.

The Army veteran's documentary about substance abuse among Iraq and Afghanistan war veterans is part of a 10-part series airing on public television stations around the country.

Each episode of the series "In Their Boots" is "a documentary about how America's servicemen and women, their families, and our communities have been profoundly changed by our nation's campaigns in Iraq and Afghanistan," according to the project's website.

The series is produced by the Brave New Foundation, which commissioned films from five veterans.

After five years in the Army, including one year at Camp Taji in Iraq, Dyer enrolled in the visual journalism program at the Brooks Institute of Photography. His film combines personal accounts of veterans affected by addiction with stop-motion animation.

'In Their Boots': Meet the filmmakers

The economist said she thinks that House Minority Leader John Boehner's proposal to raise the eligibility age for Social Security to 70 does not go far enough.

"As Americans live longer and fewer young workers are around to tax so the government can pay retiree benefits, the system is becoming increasingly unaffordable. Revenues fell below benefit costs this year with the economic crisis, as more people retired early and fewer workers were paying in benefits. So the Social Security system urgently needs reform," Mitchell told MarketWatch.

Mitchell is a professor at the University of Pennsylvania's Wharton School, executive director of the Pension Research Council and director of the Boettner Center for Pensions and Retirement Research.

"I wouldn't stop at age 70," Mitchell told MarketWatch. "I'd suggest we do what Sweden and other countries have already done, which is to index the retirement age thereafter to future changes in life expectancy."

A huge statue of Jesus Christ is under construction in southern Brazil, and it will be even taller than its famousâ€twitter.com/i/web/status/1â€¦SH
cnni

8:44 am ET April 13, 2021 RETWEET
Our solar system boasts a diverse range of planets, but some of them may share a common phenomenon with Earth: rainâ€twitter.com/i/web/status/1â€¦UC
cnni

8:16 am ET April 13, 2021 RETWEET
Rain on other planets is something scientists are still striving to understand, but new research has suggested rainâ€twitter.com/i/web/status/1â€¦pl
CNNweather