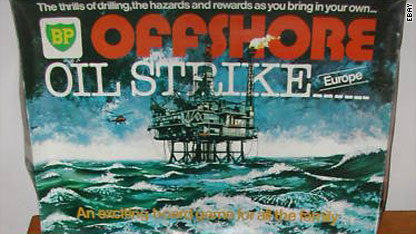 But like the real-life oil game there are some big hazards, too. Players have to deal with the possibility of large-scale oil spills and cover cleanup costs. You struggle with "hazard cards" that include phrases now part of our daily vernacular, including: "Blow-out! Rig damaged. Oil slick cleanup costs. Pay $1 million."

Sound a little familiar? The similarity has led to discussions all over the Web. It's prompted people to dig in their attics and put their old games up on eBay - many of which have promptly been snatched up.

The game has many people online remarking about whether it eerily foreshadowed the current BP disaster.

The world of video games, meanwhile, appears to have a more direct link to the Gulf oil disaster.

The game is available for purchase through Xbox's online marketplace.