Caster Semenya can return to track, compete against women 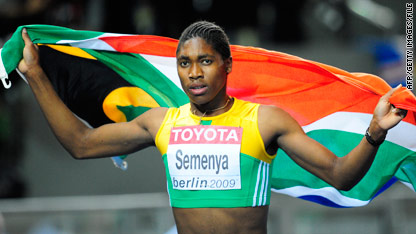 Caster Semenya has been cleared to return back to the track.

South African world champion track star Caster Semenya, who was hampered by allegations regarding her gender, can return to her sport and compete alongside of other women, the International Association of Athletics Federations said Tuesday.

The 19-year-old track star was sidelined for 11 months because she was forced to undergo gender tests after she broke onto the scene with a stunning 800-meter victory at the world championships in August 2009 and controversy broke out over whether she is a man or a woman.

During the Berlin championships, where she won the gold in her first major event, Semenya attracted a lot of attention. Her muscular build, largely-improved times and widespread allegation about her gender sparked the IAAF to order the gender verification tests.

"The IAAF accepts the conclusion of a panel of medical experts that she can compete with immediate effect," the group said in a statement on the site. "Please note that the medical details of the case remain confidential and the IAAF will make no further comment on the matter

"This has absolutely been the best I've felt in my life. I'm so grateful to be GROWN, GROWN!" BeyoncÃ© has shared aâtwitter.com/i/web/status/1â€¦uVq
cnni

12:46 am ET September 25, 2021 RETWEET
Colombian authorities said they have confiscated a shipment of 3,493 shark fins which were to be illegally traffickâ€twitter.com/i/web/status/1â€¦KM
cnni

12:01 am ET September 25, 2021 RETWEET
Two US researchers who developed the technology that underlies both the Moderna and Pfizer/BioNTech Covid-19 vaccinâ€twitter.com/i/web/status/1â€¦UY
cnni