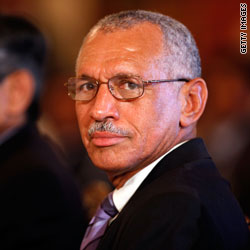 Recent comments made by the NASA administrator have become fodder for conservative bloggers and left some space buffs wondering just what really is NASA's mission.

"When I became the NASA administrator, [President Obama] charged me with three things," Bolden said in an interview with Al-Jazeera. "One, he wanted me to help re-inspire children to want to get into science and math; he wanted me to expand our international relationships; and third, and perhaps foremost, he wanted me to find a way to reach out to the Muslim world and engage much more with dominantly Muslim nations to help them feel good about their historic contribution to science, math and engineering."

The website NASA Watch reported Bolden's interview comments a few days ago, but they seem to have hit the fan in a larger-scale Monday.

Bryan York of The San Francisco Examiner wrote in response: "From moon landings to promoting self-esteem: It would be difficult to imagine a more dramatic shift in focus for an agency famous for reaching the heavens."

The status of relations between Israelis and Palestinians, people with competing allegiances to the same piece of real estate, is on the table as Israeli Prime Minister Benjamin Netanyahu meets Tuesday with President Barack Obama at the White House.

Baum, who was born in Israel and raised in Jerusalem, now lives near Washington. She is a storyteller who performs a one-woman pieceÂ called "A Land Twice Promised" in which she adopts two personas, an Israeli and a Palestinian mother. Her message: There are competing narratives and peace is not possible without accepting the narrative of "the other."

The genesis of this piece was born when Baum moved to the United States and developed a friendship with a Palestinian woman.

"Sometimes when someone has lost so much," she says, "there is no room for the story of 'the other.' But those stories are vitally important."

Along with tens of millions of others, Bergmann's attentions will be divertedÂ Tuesday by the first of two semifinals in the World Cup football tournament.

Bergmann is co-proprietor of the blog Association Football, where junkies of the beautiful and sometimes not-so-beautiful game exchange opinions.

Bergmann is a fan of Tottenham Hotspurs, a London team in the English Premier League, and D.C. United in Major League Soccer. Bergmann's day job is policy analyst at the Center for American Progress and blogging for Think Progress. He also has written op-eds for numerous newspapers and magazines.

But Bergmann has his priorities straight. The World Cup is, after all, the World Cup. Incidentally, "Association Football" was an early name for the sport created in England now known as soccer (er, football).

The Netherlands play Uruguay on Tuesday, the winner advancing to the Sunday final. The second semifinal on Wednesday pits Germany against Spain.

On a sweltering day, nothing cools better than a swim. Jones knows that more African-Americans need to learn that skill.

A study commissioned by USA Swimming and conducted by the University of Memphis found that nearly 70 percent of African-American children and 58 percent of Hispanic children have low or no swim ability. Forty percent of Caucasians are in the same predicament. Black kids are three times more likely to drown than white children.

From nearly drowning at a Pennsylvania water park as a 5-year-old - "I remember how it feels to get lightheaded and that terrible feeling that you are drowning," he told Black Voices - Jones grew to be an Olympic swimmer. As part of the 4×100-meter freestyle relay team at the 2008 Olympics in Beijing, he became to the second African-American to win a gold medal in the sport.

Jones, 26, is the primary face of MakeÂ a Splash, a project of the USA Swimming Foundation.

The former Associated Press and Atlanta Journal-Constitution reporter is a new member of the Association of Personal Historians and has embarked on a project to record the oral histories of people in the Gulf Coast regionÂ affected by the oil disaster.

"The simple mission is to find stories of people who love the Gulf and its inhabitants, who make their living from it, who have grown up with it in their back yards, and to tell and preserve those stories," Pearson wrote in an e-mail toÂ Association of Personal Historians members, who record and preserve family histories.

Pearson has created a website, The Gulf and Me, where he will publish the stories, photos and video from his trip. He also is soliciting nominations for people to interview and stories to tell.

The Gulf and Me

A North Korean defector who escaped from prison in northeast China has been recaptured by authorities, after more tâ€twitter.com/i/web/status/1â€¦SG
cnni