LeBron James: What we know so far 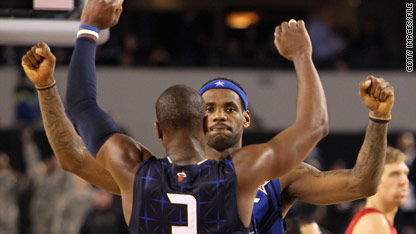 [Updated at 8:26 p.m.] Investors on Wall Street may have been betting this afternoon that LeBron James will head to the New York Knicks.

Shares of the Knicks' owner, Madison Square Garden, rose 6.41 percent, or $1.30, to $21.57 Wednesday on Nasdaq. Much of the rise happened late in the session before the trading day ended at 4 p.m. ET.

David Joyce, a media analyst with Miller Tabak & Co., told Reuters that the rise is probably because of speculation that James may announce Thursday that he'll sign with the Knicks.

The Reuters report didn't give details about the speculation. But one thing that may have fueled the hopes of Knicks fans was a Twitter post by Phoenix Suns player Jared Dudley.

At about 2 p.m. ET, Dudley tweeted the following: "Breaking News!!! My sources tell me Lebron will announce that he will be goin to the NY KNICKS tomorrow on ESPN.. This is serious.. WOW!!!!"

Later Wednesday, he tweeted this: "That's what I'm hearing.. I don't care where he goes lol.. I personally thought he would stay in Cleveland.."

[Posted at 11:43 a.m.] LeBron James plans to tell us all where he plans to play next season live in an hour-long special his team is calling "The Decision" on ESPN tomorrow night.  Here’s what we know already:

He’s going to likely get a contract worth between 96 million and 125 million dollars.  He gets the higher amount if he re-signs with his hometown Cleveland Cavaliers, takes less if he changes teams.  Those are the leagues’ salary cap rules.

The two most coveted free agents after LeBron, Dwyane Wade and Chris Bosh said today they are going to play together for the Miami Heat. They want LeBron to join them there.

We don’t know why LeBron has decided to reveal his decision on a nationally televised hour-long special, (proceeds from the commercials are going to the Boys and Girls Clubs of America), more importantly we don’t yet know where it’s going to take place. The location could be a key indicator of what he’s decided.

He wouldn’t be expected to go on TV from his hometown Cleveland/Akron to tell the world he was going to Miami, Chicago, New York etc. And he probably wouldn’t do the show in one of those cities if he was going to stay in Cleveland.  Of course he could do it from a “neutral” site to build up the mystery.

And we don’t know if the news will hold until tomorrow night at 9 when the big show is planned.  Lots of respected NBA reporters have been following the story closely.  Here are some who might get the scoop if you want to follow along.

As LeBron’s Nike poster said “We are all witnesses”