After U.S. loss, do Americans still care about World Cup? 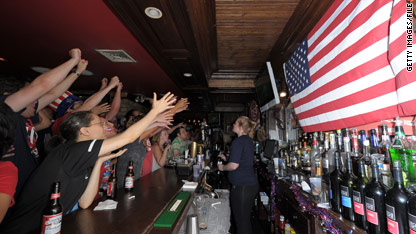 Americans packed bars to cheer on the U.S. team, but are these fans hooked on soccer?

Every four years in the United States the same question comes up - will the World Cup popularize pro soccer among the American masses?

This year the hype was palpable. The U.S. team came into the cup with high expectations. Commercials like Nike's ad grabbed us - full of stop-motion action telling us that we would write the future. How could you not get excited? Especially with the U.S. drawing England for its first match.

Casual fans packed bars, donning jerseys sporting red, white and blue, along with longtime enthusiasts. Oohs, aahs and hands slamming on desks and bartops quickly energized the masses as the U.S. came back to tie England.

But would Team USA finally pull through and make us a nation of soccer-crazy, goal-shouting enthusiasts? Maybe.

We were Twittering our fingers to death about controversial referee calls against Slovenia (just where is that?), screaming at the television and filming YouTube videos of our reactions to the blink-and-you-miss it moment.

We embraced the World Cup's sound of the year - the vuvuzela - sounding it like maniacs or downloading free phone apps in an attempt to get in on the action.

We turned off the DVR and watched live to take part in the social-networking and live-tweeting action. We seemed to be hooked. Messages and Facebook posts about the game came in quicker than the sports commentators. We were now the commentators. Call it the social vortex, a virtual watercooler; whatever it was - we wanted in - even if we didn't get it.

We invested our money with our loyalties. You couldn't find a U.S. soccer jersey, shirt, hat or any kind of sportswear with accurate team colors.

TV ratings were at an all-time high.

Then Landon Donovan slammed home a winning goal against Algeria, and Team USA advanced to the playoff. We went crazy. Nearly every YouTube video was infused with the vuvuzela. I witnessed countless numbers of random strangers standing, watching non-U.S. games on TVs at sports bars. They stopped and talked soccer - people from every walk of life who maybe wouldn't even discuss the major issues in our country. But that day they were talking soccer together.

So when we finally faced Ghana, it looked like it might be the time for U.S. soccer. People knew Donovan's name, and Americans had a star they could root for, the on-field hero who made us care.

As the competition reached the playoff stage, all kinds of bars were advertising the games and bringing in full crowds. The U.S. faced Ghana in the playoff. The game went into overtime. In the bar where I was watching the game, the buzz waned. The most frequent question I began to hear: How much more time is there in this game? Followed by remarks of how slow the time was moving and a debate of whether baseball was more boring than soccer.

Our team couldn't make it past Ghana, and just as quickly as we embraced the sport, it was over. We had nothing else to talk about, nothing to say - that is, only for the casual viewers.

There's no doubt avid soccer fans are just as thrilled to be watching the World Cup games now. (ESPN ratings have remained just about the same for non-U.S. games.) But the buzz is gone a bit. One or two tweets a day still pop up on my Twitter stream, and gasps can be heard as games play on - but certainly not with the voracity they had been.

My roommate, who I perhaps forcefully engaged in the World Cup, was glad our fake love of the sport was over. And the other day, he turned to me and asked if it was still going on.

And that was the moment I knew, soccer madness was probably over, at least for the next four years.

But there are some real positives for the sport. The U.S. made it to the top 16 teams in the world and did better than traditional powerhouses such as Italy and France. And we showed we could galvanize around an American team.

This year's U.S. team also put faces on the sport. We may now root for Jozy Altidore, Carlos Bocanegra, Michael Bradley and Donovan as individuals.

Major League Soccer has had a fantastic year of attendance - with some teams seeing a 20 percent increase. And with Donovan making the rounds on "The Daily Show," morning and late-night TV, and even gracing the covers of tabloids, the U.S. may finally have a star who can carry casual viewers into the regular soccer season such as LeBron James carries basketball fans.

While many fans who tuned in to watch the U.S. may not be about to learn the ins and outs of the English Premier League, a few probably will want to follow Clint Dempsey at Fulham and Tim Howard at Everton. It may be a slow-moving tide, but it is moving on. And that's more than can be said in a while, depending on whom you talk to.

Either way, it's likely we'll do all of this again. The cheering, the booing, the complaining and the debating - in Brazil in 2014.