The Biden administration is expected to announce that no US government officials will attend the 2022 Beijing OlympŌĆtwitter.com/i/web/status/1ŌĆ”ym

Negro League baseball players Buck O'Neil and Bud Fowler have been elected to the National Baseball Hall of Fame cnn.com/2021/12/05/us/ŌĆ”

Alabama will play Cincinnati and Michigan will face Georgia in the College Football Playoff with the winners meetinŌĆtwitter.com/i/web/status/1ŌĆ”Sy

Reports: LeBron heading for the Heat 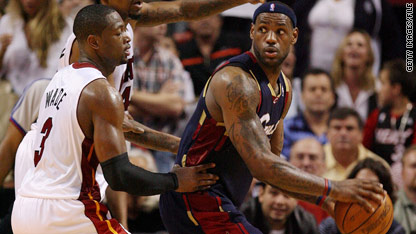 If media reports are right LeBron James may not be playing against Dwayne Wade -- but with him instead.

ESPN followed Hahn's report with its own, also saying James is heading for Miami to join fellow stars Dwyane Wade and Chris Bosh.

If the reports are accurate, the Heat will have hit the jackpot in the most frenzied talent chase in NBA history, landing the three top free agents.Things could still change of course. Sports Illustrated's Ian Thomsen doesn't believe the reports and thinks James will return to Cleveland.

Eatocracy blog: Dear LeBron, come for the hoops, stay for the grub

Wherever he decides to play, Us Magazine says LeBron has a big party planned in South Beach this weekend.

Since he knows his new deal will pay him anywhere from about $96 to 125 million LeBron can afford the South Beach soiree' and a new place to live. CNNMoney shows us there are no shortage of housing options in his price range.

James is unlikely to confirm or deny any of this today since he's planning to announce his decision in a prime-time special on ESPN tonight.