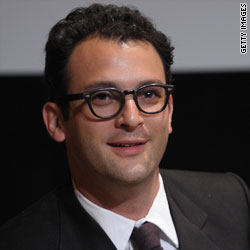 On Thursday in Fort Worth, Texas, the Environmental Protection Agency will hold the first in a series of four public meetings on the controversial issue of "hydraulic fracturing" (aka "fracking"), a method of extracting natural gas from deep within rock formations. Fox has learned firsthand about the process.

He is the filmmaker of "Gasland," a documentary that was prompted in 2008 when a gas company offered Fox $100,000 to lease his family's land in Milanville, Pennsylvania, to extract gas from the land. At the time, he did not know what hydraulic fracturing was and what leasing his land for fracking would mean.

He visited people living near sites in Pennsylvania, Wyoming, Colorado and Texas. The film shows what it says are the consequences of fracking: pools of toxic water; fouled air and water; sickness in plants, animals and people; and fires, including tap water that ignites.

The documentary airs on HBO this summer. HBO and CNN are owned by Time Warner.

The Nation: An interview with 'Gasland' director Josh Fox

"The size of his victory [66 percent of the vote] means that nobody can come to him and say, 'You owe me your election,' " Hirsch said in Newsweek.

Burns, a historian at Loyola University, said Landrieu has a chance to improve on the city's sometimes sordid politics.

"He can do less politics than normal, but I don't think he can eliminate it," Burns told Newsweek.

The director of the Emory University Center for Ethics is part of an all-star lineup of panelists as the Presidential Commission for the Study of Bioethical Issues meets for the first time Thursday and Friday in Washington.

President Obama in May asked the newly formed commission to study "the emerging field of cellular and genetic research known as synthetic biology ... consider the potential medical, environmental, security, and other benefits of this field of research, as well as any potential health, security or other risks."

Wolpe, the son and brother of prominent rabbis, holds multiple titles at Emory: the Asa Griggs Candler Professor of Bioethics, the Raymond F. Schinazi Distinguished Research Chair in Jewish Bioethics, a professor in the departments of medicine, pediatrics and sociology, and director of the Center for Ethics at Emory University. Along with that mouthful, Wolpe also serves as the first bioethicist for NASA.

Presidential Commission for the Study of Bioethical Issues

His bust of Soviet dictator Josef Stalin at the National D-Day Memorial in Bedford, Virginia, has people red-faced.

Veterans groups are angry that the leader of the communist empire that killed millions of its own citizens is enshrined with Franklin D. Roosevelt and others.

Pumphrey, an art professor at Lynchburg College, also created busts of six other World War II Allied leaders. Ironically, a statue of Stalin recently was removed in the former Soviet republic of Georgia, where Stalin was born.

Pumphrey said he was not concerned about whether his work would engender protest.

"The sculpture of Stalin does not honor Stalin. Rather, it's a sculpture that tells about his nature," the artist said in The Chronicle of Higher Education. "You don't do a portrait because of just what a person looks like. You do it to emphasize what the subject matter is about."

The Chronicle of Higher Education: Sculpting an inconvenient truth

As director of Dallas' Teen CONTACT, which does education and outreach for middle and high school students, Wall said she is worried about what she calls an appalling trend: teen biting. Yes, teens "marking" their beloved with bites on arms, chests and necks.

Wall told The 33 News (KDAF-TV in Dallas), "What I've seen, too, is on the cheek or on some of the body parts that are visible, almost like you would think of a hickey."

Wall said the teens are bombarded (think "Twighlight" and "True Blood") with vampire books, television shows and movies where you bite the one you love.

"It becomes a contest of who has the bite mark, and then that means somebody cares about you or you're in a relationship or you've been chosen, which is very similar to the movies," she said in an interview with The 33 News.

She said she views the bites as a form of mutilation.

The 33 News: 'Twilight' effect? Teenagers biting each other to mark affection