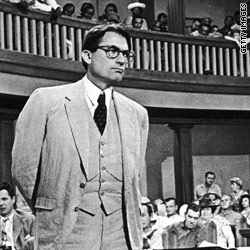 July 11 is the 50th anniversary of publication of the novel "To Kill a Mockingbird." The book's author, Harper Lee, has not given an interview in many years and rarely makes public appearances. Millions of Americans have read her book, probably during high school. Millions more are familiar with the story through the film version starring Gregory Peck.

In a documentary and book, Mary McDonagh Murphy explores the novel's power, influence and popularity. With reflections from Anna Quindlen, Tom Brokaw, James McBride, James Patterson, Wally Lamb, Oprah Winfrey and more, the documentary and book "Scout, Atticus & Boo: A Celebration of Fifty Years of To Kill a Mockingbird" chronicle the many ways the novel has shaped lives and careers.

The LA Weekly writer reported in August 2008 that the "Grim Sleeper" killings resumed and has continued to report on the case. HerÂ work in 2008 earned her a finalist prize from Investigative Reporters and Editors.

Newsweek last year profiled how Pelisek and the LAPD detective who investigated theÂ killings sometimes took different paths.Â "The reporter, Christine Pelisek of LA Weekly, is 'late 30ish or maybe a little past,' as she puts it, a slender, stylishly dressed blonde, blue eyes still wide with amazement at the tragicomic panoply of folly and greed she is lucky enough to witness," Newsweek reported.

"It was Pelisek - a former waitress whose only previous newspaper job was covering minor-league hockey in a suburb of her native Ottawa - who first brought the case to public attention in an article in 2006, linking the two new murders to the string of earlier ones."

When Education Secretary Arne Duncan visits Aviation High School near Seattle on Friday, Gilman justifiably can be proud. The native of a small town in eastern Washington and career educator is Aviation High's first principal. "It is our goal to become the premier school of choice for science, technology, engineering and math in the Pacific Northwest," the school boldly states on its website.

The school opened in 2004 with its first class of high school freshmen and now has 400 students. Many students aim for careers in the aviation industry. The school is located in a suburb, but plans a move closer to a Boeing Field.

Charles Rose, general counsel for the Department of Education, visited Aviation High last October. "Arne says it only takes five to 10 minutes to get a sense of a school. I can tell already - this is a top-level school," said Rose. "This is the kind of school that we should be shining the light on at the federal level. I'm not aware of any other in the country doing what you're doing here. I'm struck by the innovation," Rose said then.

Aviation High School: About Us

Hameeduddin, a Muslim, has been elected by the Teaneck, New Jersey City Council to be the mayor.Â Gussen, an Orthodox Jew, has been elected deputy mayor. The race was unique for its diversity. The council member Hameeduddin defeated, Lizette Parker, would have been the city's first female and African-American mayor.

"In Teaneck, New Jersey, my religion never played a factor in people voting for me or against me," Hameeduddin said. "That is a testament to the town that we live in."

Â The council remains one of the most diverse in New Jersey.

The 20-year-old University of California at Davis student is trying to get scientists from Boise to Beijing to use the term "hella" to denote the unimaginably huge, seldom-cited quantity of 10 to the 27th power - or 1 followed by 27 zeros. It started as a joke, but Sendek's Facebook petition to the Consultative Committee on Units,Â a subdivision of the International Bureau of Weights and Measures,Â has drawn more than 60,000 supporters.

Its chances for formal adoption by the global scientific community are, um, hella dim, but folks at Google were so taken with Sendek's modest proposal that the search engine site incorporated "hella" in its online calculator.

"Hella" is used mainly to make adjectives more intense, as in: "This lentil pizza is hella healthful!" It also can convey simple exuberance: "That party at Sunshine's house? Hella!" "Hella" probably derived from "helluva" and, for reasons unknown, morphed into "hella" in the Bay Area before taking wing in the 1990s. In 2001, Gwen Stefani and her band No Doubt took it national with their mega-hit "Hella Good."

For Sendek, the idea sprang from a physics class. "I asked my lab partner how many volts were in this electric field and she said, offhandedly, 'Oh, man,Â there's hella volts,'" he recalled. "It kind of clicked."

LATimes.com: Physics major has a name for a really big number