The Justice Department closes its investigation into stock trades Republican Sen. Richard Burr made after coronavirâ€twitter.com/i/web/status/1â€¦Fp 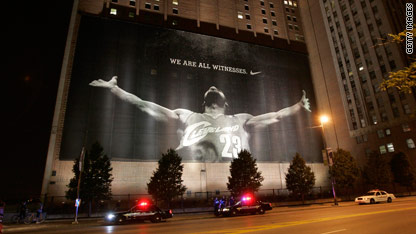 The Miami Herald sports page has a huge headline: JACKPOT!

The New York Knicks had been in the running to sign James but lost out. Today's New York Daily News front page features a photo of James and the headline: Hey, we're New York, the greatest city in the world, so WHO CARES!

Cleveland's newspaper, The Plain Dealer, features a huge photo of James walking away with the word "Gone" in large type; in small type there's an arrow pointing to James' hand with text reading, "Seven years in Cleveland. No rings."

We understand your anger, but please show that Cleveland has class: no racism, no vulgarity, and leave his family out of it. Commenters who cross those lines may have their accounts temporarily or permanently suspended.

Yes, James is free to go to Miami. He's free to market himself on ESPN. But fans in his hometown also are free to say that he never should have embarrassed them.

Art Modell is off the hook, at least for a little while. LeBron James wrested the title of Northeast Ohio's Public Enemy No. 1 away from the long-despised former Browns owner by using a one-hour ESPN television special Thursday night to turn his back on his hometown team.

He and his new mates had better win. No, strike that from the record. They'd better flatten earth and take no prisoners. The Heat never had more heat. Only a championship – more than one, in fact – will allow them to get away with this and not be infamous. They have made the Yankees look like the Salvation Army.

LeBron is free to go wherever he wants, whatever suits him best. Just because he's always lived in Akron and Cleveland doesn't mean he should always stay there. Everyone leaves home sometime, even if it's only for college. Athletes have an even smaller window than the rest of us. He has perhaps 10 more years to be one of the elite basketball players in the world, and he has a mandate to win championships if he wants to be included in the discussion of the game's all-time greats. It was apparent that wasn't going to happen in Cleveland.

Shaun Powell at nba.com on why James did not choose to sign with the Chicago Bulls:

In the end, you wonder if LeBron was spooked by a statue parked outside the United Center. Either he has such respect for Michael Jordan that he didn't want to ruin the legacy, or he felt he'd never approach it. Probably the latter.
Pat McManamon, senior NBA writer at fanhouse.com:

A killing blow right to the gut. Through the gut, really. LeBron James eviscerated a city and an area in one all-about-me hour-long show on national TV. He said he was leaving Cleveland for Miami, and he did it on a show generated by him, about him and for him. He toyed with the emotions of people who supported him, who believed because he was one of their own that he might be different.

As much as I feel for the people of Cleveland, they don't automatically get to be part of the choice. It came off poorly, but I agreed with James when he said he had to make the best decision for himself. This is another example of athletes being held to wildly different standards than we would hold ourselves. Would you stay at a job you hated for years just because you felt it wasn't right to leave your co-workers? Would I have made the same decision as James? Probably not. Would you? It doesn't matter, because you are not LeBron James.

"I'm ready for the change. I'm done with the division, and I'm ready for us to unite as a country slowly." Black voâ€twitter.com/i/web/status/1â€¦fX
sarasidnerCNN

8:39 pm ET January 19, 2021 RETWEET
Two brush fires were reignited in the footprint of the CZU Lightning Complex that burned through parts of Santa Cruâ€twitter.com/i/web/status/1â€¦qR
CNNweather

7:39 pm ET January 19, 2021 RETWEET
There are 400 lights illuminating the Lincoln Memorial Reflecting Pool in tribute to the more than 400,000 people wâ€twitter.com/i/web/status/1â€¦Zg
cnni