Leaking well's new cap appears to be in place 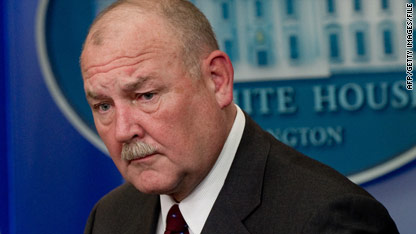 Retired Adm. Thad Allen says scientists will gauge the well's pressure after the cap is in place.

[Updated at 8:11 p.m.] BP appears to have placed a new containment cap on the leaking oil well in the Gulf of Mexico.

BP hopes the new cap will contain the gushing oil, but tests are still needed to determine its effectiveness.

[Posted at 1:29 p.m.] Crews working on the leaking oil well in the Gulf of Mexico will "be in a position later on today to put a containment cap over the well," retired Coast Guard Adm. Thad Allen, the man in charge of the federal response team, told CNN's American Morning Monday.

He said once the cap is placed on the well, scientists will be able to gauge the pressure inside the well, then determine whether the cap is holding in the oil or if crews will need to continue siphoning oil. While robots replace the old cap, crude is leaking out. Scientists estimate that 35,000 to 60,000 barrels of oil are spewing daily from BP's breached well.

Some of the gushing oil should be collected soon, BP's Chief Operating Officer Doug Suttles said. He added that the oil-gathering ship, the Helix Producer, should begin collection of oil from the ruptured well Monday and should "ramp up to full capacity" in several days, after two setbacks Sunday delayed its implementation.

Suttles blamed the delays on problems with a hydraulic system used to operate the valve and a leak in the methanol system. But he said the Helix Producer had been set back less than a day and both issues had been resolved.