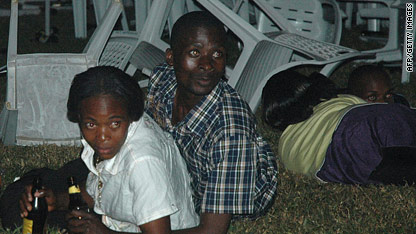 Patrons at a Kampala, Uganda, restaurant react after a bombing Sunday.

Uganda blasts: More than 70 people, including an American rugby player, were killed Sunday in Uganda by bombings that Islamic terrorists are suspected to have staged, authorities said. The explosions ripped through two venues where crowds were watching the World Cup. At least 71 other people were hospitalized, police spokeswoman Judith Nabakooba said.

"If you want to fight, why don't you attack soldiers or military barracks instead of fighting innocent people watching football?" said Ugandan President Yoweri Museveni.

Oil cap coming today? Crews working on the leaking oil well in the Gulf of Mexico will "be in a position later on today to put a containment cap over the well," retired Coast Guard Adm. Thad Allen, the man in charge of the federal response team, told CNN's "American Morning" onÂ Monday.

He said once the cap is placed on the well, scientists will be able to gauge the pressure inside the well, then determine whether the cap will hold the oil or if crews will need to continue siphoning up oil to relieve pressure. While robots replace the old cap, crude is flowing freely. Allen has asked BP to conduct "integrity" testing later Monday to determine how to move forward.

'Bandit' nabbed: The former teen fugitive known as the "barefoot bandit" is expected to appear in court this week after authorities nabbed him in a high-speed boat chase in the Bahamas, police said.

"It is expected that he will appear in court on arraignment later this week to answer to a number of criminal charges," Greenslade said Sunday.

Fugitive director not coming to U.S.: Oscar-winning filmmaker Roman Polanski will not be extradited to the U.S. to face child sex charges, the Swiss government announced Monday. He was arrested last year, but the government confirmed he is now free.

The Swiss court rejected the American request because the U.S. did not supply the legal records Switzerland requested, and because Polanski had a reasonable right to think he would not be arrested if he visited the country,Â Justice Minister Eveline Widmer-Schlumpf said. U.S. prosecutors cannot request extradition again from Switzerland, but may apply to other countries to detain and extradite him, she said.

Polanski pleaded guilty in 1977 in Los Angeles, California, to having unlawful sex with a 13-year-old girl, but he fled to Europe before he was sentenced. In May, a British actress came forward and said Polanski sexually abused her after she was cast in one of his films.

A 20-year-old gas station worker was shot and killed after an argument about a face mask. The suspect later gave hiâ€twitter.com/i/web/status/1â€¦2y
cnni