Police: Shooter kills self, two others in workplace attack 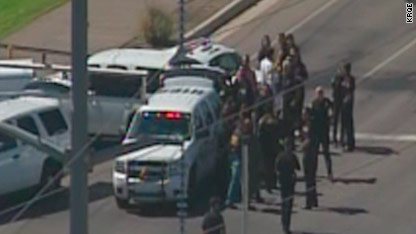 Police respond to a workplace shooting in Albuquerque, New Mexico, on Monday.

[Updated at 5:44 p.m., July 12] Three people - not six, as police initially said - are dead after Monday's shooting at a business in Albuquerque, according to Police Chief Ray Schultz.

The three dead include the shooter, who turned a gun on himself, according to police.

[Updated at 2:58 p.m., July 12] A former employee shot and killed five people at a business Monday in Albuquerque before turning the gun on herself, New Mexico authorities said.

Police said officers responded to a 911 call at 9:26 a.m. (11:26 a.m. ET) that multiple shots had been fired. When officers entered the building, they found a total of 10 people shot: four were dead, including a man believed to be the shooter, officials said. CNN mistakenly reported earlier that the shooter was believed to be a woman.

Are you there? Please send your pictures, videos and stories to CNN's iReport.com

Two people have died as a result of gunshot wounds, two are in stable condition, and two others are receiving emergency medical attention, police said.

"We believe this incident to be a domestic-violence workplace situation," Albuquerque Police Chief Ray Schultz said.

One of the victims, Schultz said, is believed to be the wife or girlfriend of the shooter, who was a current employee at Emcore Coporation.

According to CNN affiliate KRQE, police said the shooter had been involved in a past domestic violence incident.

Despite record numbers of Covid-19 cases and deaths in Russia, lawmakers continue to reject the introduction of a c‚Ätwitter.com/i/web/status/1‚Ä¶Hf
cnni