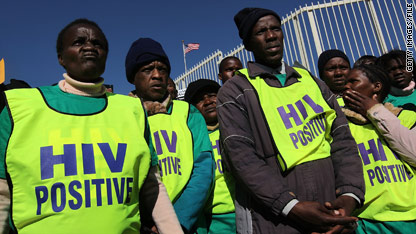 Activists gather at the American consulate in Johannesburg, South Africa, last month. The nation has one of the highest AIDS rates.

AIDS is losing its stranglehold on a key demographic in Africa, according to a U.N. report released Tuesday, and it appears the driving force behind the trend is common sense.

People between the ages of 15 and 24 are among the hardest-hit by sexually transmitted infections, and 80 percent (4 million) of young HIV patients live in sub-Saharan Africa, UNAIDS reports.

Polls show that AIDS is among the foremost concerns of citizens living in many African countries, and if the U.N. data are accurate, teens and young adults in these countries have decided to reverse the trend.

“Young people are leading the prevention revolution by taking definitive action to protect themselves,” the report states. “The impact: HIV prevalence among young people is falling in 16 of the 25 countries most affected by AIDS.”

Among the nations leading the way – and raising hopes that they can slash their countries' 1994 AIDS rates among young people – are Botswana, Ivory Coast, Ethiopia, Kenya, Malawi, Namibia and Zimbabwe.

Kenya, according to the data, had one of the most significant decreases with rates in urban areas dropping from 14.2 percent in 2000 to 5.4 percent in 2005.

Several behaviors are cited as the reason for the drop. In 13 countries, young people are waiting longer to have sex. Another 13 countries reported that young folks had fewer sexual partners in the last year.

And while condom use by one gender or the other is up in several countries, Cameroon, Tanzania and Uganda reported increased condom use among men and women.

“For the first time, the report shows that reductions in HIV prevalence among young people have coincided with a change in sexual behaviors patterns among people,” according to the report, which calls declining HIV infections among young people “a breakthrough essential for breaking the trajectory of the AIDS epidemic.”

Of the 25 countries that comprise the bulk, or 85 percent, of the world’s AIDS sufferers, 13 are located in Africa, according to another report by UNAIDS. It says young women – who are twice as likely to contract HIV than young men – are particularly vulnerable in sub-Saharan African.

While China, India, South Africa and Nigeria require the most resources to fight AIDS, the two African nations face the greatest domestic shortfalls in what they can devote to the battle.

The UNAIDS report, which coincides with the Obama administration’s unveiling of its domestic AIDS strategy, calls for empowering young people to continue the fight against AIDS. It also calls for rights-based health education and increased testing and prevention efforts.

“Young people have shown that they can be change agents in the prevention revolution,” the report concludes.