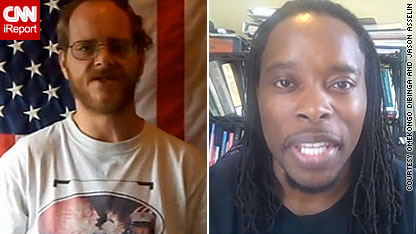 CNN.com readers and iReporters have had a passionate response to the NAACP’s resolution condemning Tea Partiers for having “racist elements.”

“We take issue with the Tea Party’s continued tolerance for bigotry and bigoted statements. The time has come for them to accept the responsibility that comes with influence and make clear there is no space for racism and anti-Semitism and other forms of bigotry in their movement,” NAACP President and CEO Ben Jealous said.

iReporter Omekongo Dibinga posted a video, telling CNN, “If the Tea Party wants to become a credible organization, it has to show leadership when racist acts are committed by its members."

He went on to mention things he believes the Tea Party could do to combat racism: “The Tea Party can also partake in events that promote respect for other groups in a non-reactionary capacity, such as MLK Day events. The Party can also call out individuals by name who commit racist acts.”

Jason Asselin, who has attended some Tea Party events, disagreed, saying in his own iReport video that the resolution was not fair.

“All organizations have people among them that are there for the wrong reasons, even the Tea Party has these type of people. If people were to pay attention, they might see these people being asked to leave,” he said. “Everyone has a right to free speech but even that should have its limits.”

Commenter “SJS52987” wrote, “If the Tea Party isn't racist, how is that every time I ask one of them a legitimate policy question, they can't answer it without mentioning President Obama's race?”