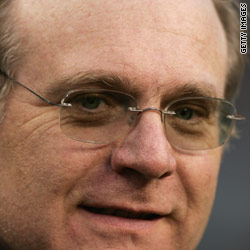 The Microsoft Corp. co-founder has pledged to give away most of his fortune to charity. "[M]y philanthropic efforts will continue after my lifetime," Allen said in a statement Thursday. "I've planned for many years now that the majority of my estate will be left to philanthropy."

Allen's commitment comes as two of America's richest men, Bill Gates and Warren Buffett, have invited fellow billionaires to give half their wealth to charity. The unusual initiative is being promoted through the website GivingPledge.org and is aimed at members of the Forbes 400, a list of the richest Americans.

Allen has donated more than $1 billion through personal giving and his foundation. The 57-year-old billionaire was diagnosed with non-Hodgkin's lymphoma in November 2009, more than 25 years after he was treated for Hodgkin's disease, a spokesman at his company Vulcan Inc. said at the time.

Allen, who co-founded Microsoft with Gates in the mid-1970s, was that company's chief technologist until he left in 1983, the year he was treated for Hodgkin's lymphoma, according to the website for his Paul G. Allen Family Foundations. In March, Allen ranked 37th on the Forbes list of the world's billionaires. His net worth was $13.5 billion, according to the magazine.

Allen once said, "When it comes to helping out, I don't believe in doing it for the media attention. My goal is to support the organizations that need help."

The Nobel Peace Prize winner turns 92 on Sunday and is scheduled to publish a new autobiography this October. According to publisher Farrar, Straus and Giroux, "Conversations With Myself " will draw upon Mandelaâ€™s personal archive of never-before-seen materials, including journals he kept while on the run during the anti-apartheid struggle of the early 1960s, diaries and draft letters written at Robben Island and other South African prisons during his 27 years of incarceration, and his notebooks and privately recorded conversations.

DanceWithShadows.com reports that Verne Harris, director of the Nelson Mandela Foundation in Johannesburg, said that the book will depict the leader "not as a saint or an icon, but as a person." President Obama has written the bookâ€™s forward.

Mandela was released from prison in 1990, received the Nobel Peace Prize in 1993 and was inaugurated as the first democratically elected president of South Africa in 1994.

Macmillan.com preview: 'Conversations With Myself'

The Texas Board of Regents voted unanimously Thursday to change the name of Simkins Residence Hall, a University of Texas at Austin dormitory named after a man prominent in the Ku Klux Klan in the 1800s. "Creekside Residence Hall and Creekside Park will replace the current names of Simkins Hall and Simkins Park, respectively," officials with the University of Texas System announced in a statement.

The dorm was built in the 1950s and named for William Stewart Simkins, who taught at the University of Texas at Austin's law school from 1899 until his death in 1929. Earlier this year, Russell, a former University of Texas law professor, published a research article on Simkins.

Russell told CNNÂ on ThursdayÂ that Simkins "was a gun-toting, mask-wearing nightrider, and his fellow Klansman who murdered 25 people during a three-year period in just one of the counties in Florida in which he operated."

Russell said university officials named the dorm for the Klan member shortly after the 1954 U.S. Supreme Court decision that integrated schools. Russell, now teaching at the University of Denver, wrote in his paper that "during the 1950s, the memory and history of Professor Simkins supported the university's resistance to integration."

Russell said he didnâ€™t expect the university to make the name change. "I did hope to provoke a conversation about race, history and law. Thatâ€™s been successful beyond my wildest dreams."

CNN: Board votes to change name of UT dorm named for Klan member

The retired janitor will receive an honorary degree on July 30 from Missouri State University in Springfield, the hometown college that denied her admission in the summer of 1950.

USA Today reports that Walls, a high school salutatorian, was the first African-American student ever to apply to what was then known as Southwest Missouri State University. But, according to university records, the school was uncomfortable at that time becoming a "guinea pig" in a situation involving equal educational opportunities. Walls told the newspaper that she wanted to become a teacher.

She eventually had eight children, 12 grandchildren and 14 great-grandchildren. Sixty years later, the 78-year-old said sheâ€™s not sure what sheâ€™ll do with the college degree. "To me, it would be an inspiration to my children. They have been raised in a better world," she told the paper.

Since January, Dr. Sanjay Gupta and the producers of CNN Medical News have been working with six people who took the Fit Nation Challenge to participate with Gupta in this weekendâ€™s triathlon. So Brouhard has spent the last six months swimming, biking and running.

Brouhard learned she had breast cancer in April 2009. After various treatments, medications and surgeries, the mother of three children said that the cancer was gone, but it left her out of shape and uninspired. Her husband found an ad for the Fit Nation Challenge, and they both thought it was a perfect fit.

Brouhard said the triathlon was not only her motivation to get back in shape, but a way for her to set an example for all women who have faced breast cancer and other illnesses.

"I hope that I can be an inspiration to others," Brouhard said. "I think it will be such a feeling of satisfaction for myself to complete this, knowing I can put the cancer behind me. I think it will be an emotional day."

Michael Jackson will be portrayed by his 26-year-old nephew, Jaafar, in a movie biopic about the late pop star, stuâ€twitter.com/i/web/status/1â€¦g6
cnni

7:25 am ET January 31, 2023 RETWEET
Unions and opposition parties have called for people to protest in major cities, hoping for a repeat of the first mâ€twitter.com/i/web/status/1â€¦Yv
cnni

7:05 am ET January 31, 2023 RETWEET
The bare-chested boxer who became a hero to Iranâ€™s protest movemencnn.it/3YdfXVgtY
cnni

Michael Jackson will be portrayed by his 26-year-old nephew, Jaafar, in a movie biopic about the late pop star, stuâ€twitter.com/i/web/status/1â€¦g6
cnni

7:25 am ET January 31, 2023 RETWEET
Unions and opposition parties have called for people to protest in major cities, hoping for a repeat of the first mâ€twitter.com/i/web/status/1â€¦Yv
cnni

7:05 am ET January 31, 2023 RETWEET
The bare-chested boxer who became a hero to Iranâ€™s protest movemencnn.it/3YdfXVgtY
cnni