The incident occurred after Oakland police received a call about 8:15 a.m. (11:15 a.m. ET) of an armed man walking toward the Fruitvale BART station, according to Thomason. Police notified BART officers, who also responded.

BART officers were the first to reach the suspect, described as a Hispanic male between 30 and 40 years old, Thomason said. The BART officers chased the man from the station to the street, where Oakland police joined in the pursuit over four blocks in the Fruitvale area.

Thomason said Oakland police tried to Taser the man twice, but to no effect. The man, armed with two knives, then attempted to charge at one of the officers, a police statement said.

Despite no evidence that a giant sealing cap had caused further damage, the company said that pressure tests could continue beyond the 48 hours, which ended at 3:25 p.m. ET.

It was unclear Saturday afternoon when officials might allow oil to again flow to vessels.

Pressure was still rising Saturday though it had slowed considerably as expected, BP Senior Vice President Kent Wells said earlier in the day.

"The longer the test goes the more confidence we have in it," he told reporters in a conference call Saturday. "There's no evidence we don't have integrity."

Sec. Clinton heads to Afghanistan as part of Asia trip

Secretary of State Hillary Clinton is heading to Afghanistan on Saturday on a mission that will take her to a major international conference in Kabul focusing on the problems and the future of the war-torn nation.

The visit is part of a voyage through Asia that includes stops in South Korea and Vietnam. But it will begin with the Kabul conference on Tuesday, a gathering that will deal with economic development, governance, security and reconciliation across Afghanistan.

The Afghan government and the United Nations will be chairing the conference. Clinton, U.N. Secretary-General Ban Ki-moon, foreign ministers and top officials from more 70 countries and organizations will be attending the meeting, described as the first conference of its kind in Afghanistan.

It is the latest step in what Western and Afghan officials call the Kabul process - the transition to more Afghan responsibility for running the nation. Earlier this year, two other high-profile meetings dealt with the issue - an international conference in London, England, last January and a "peace jirga," a meeting of tribal and religious leaders in June. 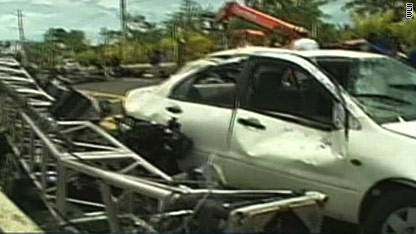 Bus with 27 kids tips over on Kansas interstate

Eight children were transported by ambulance and 18 others were being taken by bus to their families, Sheriff Jeff Curry said. One child was taken to a local hospital by helicopter.

No other vehicles were involved, he said. The cause of the accident, which is being investigated by highway patrol, is unknown.