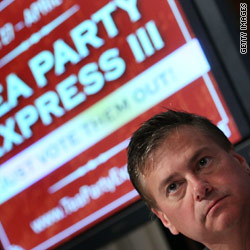 The Tea Party activist says he's done discussing the controversy stirred up by his attack on the NAACP. The National Tea Party Federation, an organization that seeks to represent the Tea Party political movement around the country, has expelled Williams and his Tea Party Express organization because of an inflammatory blog post Williams wrote last week, federation spokesman David Webb said Sunday.

In response, Williams announced in another statement on his blog that "I am refusing all media requests on this" and canceled a scheduled interview on CNN to discuss the controversy Sunday evening, citing a last-minute change in travel plans.

Williams wrote the incendiary blog post that satirized a fictional letter from what he called "Colored People" to President Abraham Lincoln in response to an NAACP resolution that called on Tea Party leaders to crack down on racist elements in the movement.

"Dear Mr. Lincoln," began the letter posted by Williams. "We Coloreds have taken a vote and decided that we don't cotton to that whole emancipation thing. Freedom means having to work for real, think for ourselves, and take consequences along with the rewards. That is just far too much to ask of us Colored People and we demand that it stop!"

Williams, a conservative talk radio host, said the post was intended as satire.

The activist from Maricopa, Arizona, reportedly has been leading a group of armed civilians on patrols against illegal immigrants. CNN affiliate KTVK-TV in Phoenix reports that the group claims on the "Just Another Day" blog that "there are 11 less illegal aliens in this country thanks to us. We are doing the job the federal government refuses to do."

According to the television station, the group is led by Hughes and J.T. Ready, who have openly identified with the neo-Nazi National Socialist Movement. In his blog biography, Hughes, 46, writes that his interests include “political activism, supporting groups that oppose illegal immigration, causing civil unrest in my rural Western Pinal County, and conducting armed UDA patrols along the ‘illegal immigration superhighway.’ ” UDA stands for undocumented alien.

Hughes adds, “I’m one of those guys that shows up at street protests and stirs things up. My government thinks I’m dangerous, so be careful.”

The activist from Chicago, Illinois, will join 1,000 others from around the nation who are mobilizing in Washington to urge Congress to pass the DREAM Act.

Unzueta, who helped organize the three-day event, told CNN that on Tuesday, marchers will rally at the U.S. Capitol and stage a DREAM graduation. During the ceremony, students will tell their stories of the immigrant experience in America, hear from lawmakers and corporate leaders, and receive “diplomas.”

The Development, Relief and Education for Alien Minors Act is proposed federal legislation, introduced in both the House and Senate in March 2009, that would permit certain immigrant students who have grown up in the U.S. to apply for temporary legal status. These students eventually could obtain permanent status and become eligible for U.S. citizenship if they go to college or serve in the U.S. military. Today, many of those immigrant students find it difficult to attend college, get a driver’s license or apply for jobs.

At age 10, Unzueta came to the U.S. from Mexico City with her mother. After receiving humanitarian parole from U.S. immigration officials, she graduated from the University of Illinois at Chicago. She says if the Dream Act were to pass, it would affect more than 2 million people, based on recent studies.

Unzueta said one reason the DREAM Act has not passed is due to people “who are not realizing the value of immigrant youth.” Another reason is racism. “For some people, not for everyone,” she said. “I have heard so many comments from people saying that we’re bringing crime to the U.S., for example. That’s not true. A lot of people are listening to the misconceptions, rather than figuring out the facts - that’s where we get stuck. It’s prejudice that prevents people from seeing the facts.”

The author of the best-selling book “Three Cups of Tea” has been meeting with top U.S. military officials and village elders in Afghanistan. The New York Times reports that Mortenson, whose Central Asia Institute has led to the building of more than 130 schools in Afghanistan and Pakistan, had met with Gen. Stanley McChrystal, the former commander of U.S. forces in Afghanistan; Gen. David Petraeus, who replaced him; Adm. Mike Mullen, chairman of the Joint Chiefs of Staff, and others.

Mortenson’s story of building schools in Pakistan became popular among military wives, who urged their husbands to read it. Mortenson, 52, who said he has no contract with the U.S. Defense Department, told the newspaper there is no military fix in Afghanistan - that the long-term solution is to educate girls, and that will take decades.

“But al Qaeda and the Taliban are looking at it long range over generations,” he told the Times. “And we’re looking at it in terms of annual fiscal cycles and presidential elections.”

Top musical theater stars will perform Monday night on one of the nation’s most visible stages when PBS tapes “A Broadway Celebration: In Performance at the White House” to air this October.

According to TV.com, at age 8, the actress and singer played Dorothy in her elementary school production of “The Wizard of Oz.”  In 2003, Menzel originated the role of Elphaba - the Wicked Witch of the West - in the hit musical “Wicked” and won a best featured actress Tony Award. That same year, she married her “Rent” co-star, actor Taye Diggs.

The best moment of the entire last TV season was Menzel’s “I Dreamed a Dream” duet with Lea Michele in May’s Episode 19 of the high-school-glee-club-members-are-just-as-cool-as-football-players show, “Glee.” We can argue about that later.