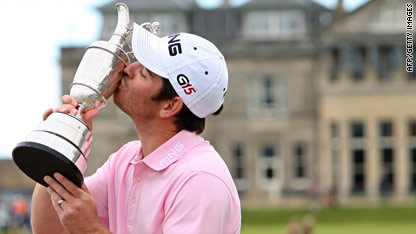 The biggest sports surprise of the past week came from a 27-year-old South African who grew up on a dairy farm. Louis Oosthuizen entered the 139th British Open ranked No. 54 in the world, but he managed to blow away the competition at St. Andrews with a four-day total of 16-under-par 272.┬Ā

In one of the most impressive, Tiger-Woods-like routs on the course, Oosthuizen captured the claret jug by seven shots over England's Lee Westwood. But as Golf.com's Damon Hack explains, Oosthuizen┬Āwasn't always that smooth on the golf course. His hot temper and history of mistakes kept him from fulfilling the potential that fellow star golfers knew he had.

But in this year's Open, he quashed all doubts, leaving Woods to struggle for a 3-under, 23rd-place finish and Phil Mickelson to end┬Āup 48th.┬Ā┬Ā

Philadelphia Phillies vs. St. Louis Cardinals (7 p.m. ET, ESPN)
Matt Holliday's RBI single with two outs in the ninth inning Sunday propelled the Cardinals to a 5-4 win over the Los Angeles Dodgers. With the win, the Cards completed their first four-game sweep of the Dodgers since July 1987.┬Ā It put them a half-game ahead of the Reds in the NL Central - and that was without Albert Pujols, who took the day off.

St. Louis right-hander┬ĀBlake Hawksworth (3-5, 4.73 ERA) will face off against Kyle Kendrick (5-3, 4.44) and look to snap the Cards' four-game home losing streak to Philadelphia and claim six straight for the first time since September 2008.┬Ā

1: Cut in eight majors that Louis Oosthmuizen made before winning the 139th British Open.┬Ā

8th: Inside-the-park home run at Progressive Field since 1994, which was hit by Jhonny Peralta in the Cleveland┬ĀIndians' 7-2 win over the Detroit Tigers on Sunday.┬Ā

$45 million to $50 million: The guaranteed money that top draft pick Sam Bradford is expected to get from the St. Louis Rams in the most lucrative contract in NFL history.

5:22 pm ET September 24, 2021 RETWEET
US President Biden has determined he will not assert executive privilege to shield Trump-era records from being seeŌĆtwitter.com/i/web/status/1ŌĆ”BN
cnni