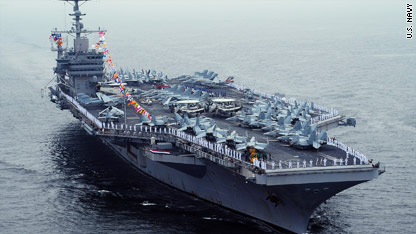 The United States is sending the aircraft carrier USS George Washington to South Korea this week in a display of "the strength of our alliance and our constant readiness to defend the Republic of Korea," the ship's commander said Monday.

The visit comes after months of heightened tensions on the Korean peninsula after the sinking of a South Korean warship in a torpedo attack in March. A multinational inquiry found North Korea responsible for the attack on the corvette Cheonan, in which 46 South Korean sailors were killed. North Korea has denied any connection with the attack and said it is the victim of an international conspiracy.

Earlier this month, the United Nations formally denounced the sinking of the Cheonan, but did not specifically mention North Korea.

In anticipation of the U.S. announcement, Pyongyang at the weekend said the presence of the carrier would be a "reckless provocation," according to the state-run Korean Central News Agency. It said the U.S. and South Korea were trying to save face after suffering a "diplomatic defeat" in the United Nations.

Two U.S. destroyers will also join the George Washington for its call in the port of Busan. A third destroyer will visit Chinhae, U.S. Forces Korea said. The four-day port call begins Wednesday.

"The U.S. Navy maintains a robust forward presence in the Asia-Pacific region and the people of the Republic of Korea are our good friends and allies," George Washington commanding officer Capt. David Lausman said in a statement Monday.

The 97,000-ton George Washington, based in Yokosuka, Japan, is the only U.S. carrier whose home port is outside the United States.