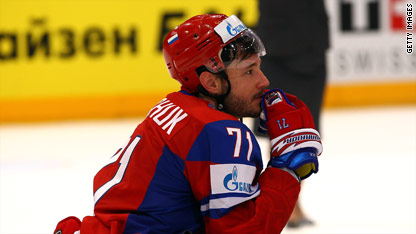 Know where you'll be in 17 years? Ilya Kovalchuk does.

The high-scoring Russian left wing has agreed to a $102 million deal with the Devils that will keep him in New Jersey though the 2026-27 season.
Where does the deal rank in the annals of NHL history? SI.com takes a look at how Kovalchuk's new contract stacks up.

Kovalchuk's staggering deal has made headlines, but there's plenty of attention-grabbing action on the field as MLB, tennis, soccer and the Tour de France highlight the sports dockets.

Here are some of the day's can't-miss events (all times Eastern).

Tour de France, Stage 16. (6:30 a.m., Versus) Defending Tour champ Alberto Contador has regained the yellow jersey from Andy Schleck, but can he keep it as the riders continue their run through the Pyrenees, cycling 124 miles from Bageres-de-Louchon to Pau?

Phillies at Cardinals (8:15 p.m., myphl17, FS-M, ESPN) - The streaking Cardinals will go for their seventh straight for the first time since July 7-16, 2006 as they host the Phillies. St. Louis will put its chances on Chris Carpenter, who is 4-2 with a 5.73 ERA in eight appearances vs. the Phillies, whom has hasn't faced since 2006.

Angels at Yankees (7:05 p.m., FS-W, MY9) - Alex Rodriguez stands two home runs from becoming the seventh player in MLB history to reach the 600-homer plateau as the Yankees host the Angels, who are 2-8. They will play at the new Yankee Stadium in the Bronx.

By The Numbers
11 - The Texas Rangers snapped an 11-game losing streak at Detroit's Comerica Park as Nelson Cruz's 14th-inning home run lifted the Rangers to an 8-6 win.

21,111 - Points by Dirk Nowitzki, the Mavericks' all-time leading scorer who signed his new contract which will reportedly pay the German more than $80 million over four years.

Ashton Kutcher and Mila Kunis say they don't believe in bathing their kids or themselves too much. "If you can seeâ€twitter.com/i/web/status/1â€¦vM
cnni

9:53 pm ET August 1, 2021 RETWEET
This house on Argentina's Atlantic coast collapsed into the ocean. Argentina is one of the many countries facing riâ€twitter.com/i/web/status/1â€¦Pd
CNNweather