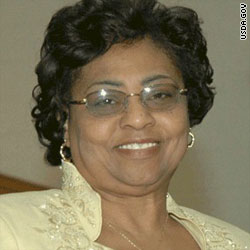 The African-American employee of the Department of Agriculture resigned Monday after conservative media outlets aired a video of her telling an audience she had not given a white farmer "the full force of what I could do" to help him save the family farm.

Agriculture Secretary Tom Vilsack said he had accepted the resignation of Sherrod, the department's state director of rural development for Georgia.

"There is zero tolerance for discrimination at USDA, and I strongly condemn any act of discrimination against any person," Vilsack said. "We have been working hard through the past 18 months to reverse the checkered civil rights history at the department and take the issue of fairness and equality very seriously."

Conservative website publisher Andrew Breitbart originally posted the video, which shows Sherrod telling her audience that the farmer she was working with "took a long time ... trying to show me he was superior to me." As a result, she said, she "didn't give him the full force of what I could do. I did enough."

To prove she had done her job, she said, she took him to a white lawyer. "I figured that if I take him to one of them, that his own kind would take care of him," she said.

Sherrod told CNN on Tuesday that her remarks were taken out of context and failed to include the point of her story - that people need to move beyond race.

The incident took place in 1986, before she worked for the USDA, she said. "I was telling the story of how working with him helped me to see the issue is not about race. It's about those who have versus those who do not have."

The national chairman of the New Black Panther Party says a recent gruesome murder should be classified as a hate crime.

The newspaper reports that Hill's co-worker, Gregory Collins, was arrested in early June a few hours after the incident and charged with murder.

During Saturday's rally, Shabazz said Collins did not act alone and that law enforcement is not doing enough.

"This case is an outrage. Gregory Collins has not even been indicted. That's right. Over 40 days after (the) dragging and murder," Shabazz shouted to the crowd through a megaphone. "When a man is dragged behind a pickup truck, that is a modern-day lynching."

According to the New Black Panther Party's website, Shabazz has led the party since 2001 and it now has 27 chapters in the United States, the United Kingdom, the Caribbean and Africa.

A graduate of Howard University in Washington and the Howard University School of Law, Shabazz is a follower of the Nation of Islam's national representative, Minister Louis Farrakhan, and helped to organize the 1995 Million Man March.

The New Black Panther Party: About the national chairman

The director of U.S. Immigration and Customs Enforcement says he has the resources to deport 400,000 illegal immigrants annually from all across the nation. But in Arizona alone, he says, there are some 460,000.

Morton told The Washington Post that if Arizona's new immigration law takes effect on July 29, he is "not going to shut down immigration enforcement in the 49 other states of the union to commit to responding to every potential immigration violator in the state of Arizona."

A former federal prosecutor, Morton, 43, runs the largest investigative agency in the Department of Homeland Security, with more than 19,000 employees and an annual budget of more than $5 billion. He told the newspaper that he has become used to criticism from the political right and left.

"You develop a thick skin in a job like this," said Morton. "I'd imagine for some other senior leaders in government, the day when someone calls for their resignation would be the day they'd remember throughout their career. That's just part of the territory here."

The imam of the Islamic Center of Temecula Valley in California says he is surprised by the level of criticism aimed at the center's plans to replace its current mosque - now located between a pipeline company and a packaging warehouse - with a new mosque on four acres near Temecula's housing developments.

The Los Angeles Times reports that opponents of the mosque fear it could turn the community of 105,000 into a haven for Islamic extremists.

"The Islamic foothold is not strong here, and we really don't want to see their influence spread," said Pastor Bill Rench of Calvary Baptist Church.

Harmoush told the newspaper, "Our children go to the same schools their children go to. We shop at the same stores where they shop." He added, "All of a sudden our neighbors wake up and they're opposed to us building the Islamic center there, the mosque. I hope it's a small group."

According to the mosque's website, Harmoush completed his religious studies at private institutions in Syria and was taught by a circle of well-known scholars in the Middle East and in North America. Since 2007 he has been on the faculty at the California State University in San Bernardino, teaching the Arabic language and Islamic culture.

The attorney, who was part of O.J. Simpson's defense team at his 1995 murder trial, had agreed last week to help represent Lindsay Lohan. The troubled 24-year-old  actress is scheduled to begin a 90-day jail sentence on Tuesday for violating her probation in a 2007 drug case.

Shapiro's office released this statement a few days ago: "I have agreed to represent Ms. Lohan on the condition that she complies with all of the terms of her probation, including a requirement of jail time that was imposed by Judge Marsha Revel. Ms. Lohan is suffering from a disease that I am all too familiar with. Hopefully, I can be of assistance to Ms. Lohan and Judge Revel in implementing a treatment approach recommended by medical professionals for Ms. Lohan's long term recovery and sobriety."

But on Tuesday, TMZ.com and the Los Angeles Times reported that Shapiro is no longer representing Lohan.

People magazine reported that Lohan has been staying at Pickford Lofts, a sober-living house founded by Shapiro. According to the Pickford Lofts website, Shapiro lost his son, Brent, to the disease of chemical dependence. On the night of October 9, 2005, Brent Shapiro mixed a few drinks with a tab of Ecstasy and became ill.  He was buried a day and a half later.