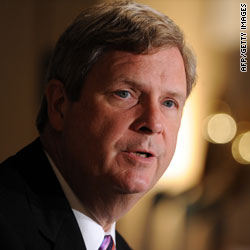 The agriculture secretary said early Wednesday that he will review the case of a former Agriculture Department official who resigned after a video clip surfaced of her discussing a white farmer.

Shirley Sherrod - an African-American - resigned this week under pressure after the video clip first appeared on a conservative website and later on Fox News. In the video, she seemed to say she withheld services from a white farmer.

However, Sherrod later said the clip only shows part of her comments and that she tells the story of her experience - from nearly a quarter century ago when she was not a federal employee - to illustrate the importance of moving beyond race.

The video initially brought condemnation from the NAACP, which it later retracted after the context of the clip became clear.

Vilsack said Tuesday that the controversy, regardless of the context of her comments, "compromises the director's ability to do her job." He said, "She's a political appointee, and her job is basically to focus on job growth in Georgia, and I have deep concern about her ability to do her job without her judgments being second-guessed."

Before his appointment by President Obama, Vilsack┬Āwas governor of Iowa for┬Ātwo terms, the first Democrat elected to that office in more than 30 years.

According to his official biography, Vilsack, a native of Pittsburgh, Pennsylvania, was born into an orphanage and adopted in 1951. He received a bachelor's degree from Hamilton College in 1972 and earned his law degree from Albany Law School in 1975.

The Democrat came from Memphis, Tennessee, to Washington three years ago ready to join the Congressional Black Caucus. That's because more than 60 percent of his constituents are black.

The Washington Post reports that while Cohen has the backing of a number of African-Americans in Congress in the upcoming election,┬Ācaucus members must be black. Cohen is white.

For the third time in a row, Cohen is facing a black opponent in the August 5 primary - former Memphis Mayor Willie Herenton.

"The whole idea of people voting by race, with Barack Obama's election, is going by the wayside," Cohen told the Post. "To some extent, this race will be a litmus test about where we are."

According to the newspaper, Rep. John Lewis of Georgia offered that Cohen might become an honorary member of the caucus. Cohen said he would still like to be an official member.

"It was something I would have been proud to have as an honor," he told the paper. "I like to break barriers."

According to Cohen's website, "As a child, he was stricken with polio, but through hard work, he was able to beat this debilitating disease."

President Obama's nominee to be the new director of national intelligence said Tuesday he can succeed in the job without Congress legislating new authority.

Clapper, a retired Air Force lieutenant general, told his confirmation hearing by the Senate Intelligence Committee that his role has the clout to oversee the nation's 16 intelligence agencies or programs.

In particular, Clapper said the┬Ādirector of national intelligence post he would assume has authority over the director of the CIA, which has been in question in recent years.

"I would not have agreed to take this position on if I was going to be a titular figurehead or hood ornament," Clapper said of the job created after the September 11, 2001, attacks as part of an intelligence expansion to strengthen and better coordinate activities.

There needs to be a "clear, defined, identifiable leader" of the intelligence community to "exert control over it," he said.

The┬Ādirector of national intelligence job has proven challenging, with four directors holding it since the position was created in 2004.

If confirmed, Clapper would succeed Dennis Blair, who resigned under pressure in May after breakdowns in intelligence coordination revealed by two failed terrorist bombing attempts of U.S. targets - an airliner over Detroit, Michigan,┬Āon Christmas Day and in New York City's Times Square on May 1.

Clapper, who retired from the Air Force in 1995 after a 32-year career, is also a recipient of the NAACP National Distinguished Service Award.

The rodeo clown is rolling a 60-pound barrel on a 130-mile trek from Washington to the Cowtown Rodeo in New Jersey. Nash told the website NJ.com that he plans to arrive Saturday, which is also the National Day of the Cowboy.

"At home, we get phone calls every week from friends or relatives of children who've killed themselves because of bullying," said Nash's wife, Darlene. "And Marvin follows up on every single one of them."

According to the website, one day, Nash had had enough.

"He finally just threw up his hands and said, 'I can't take this anymore,' " said Darlene. "He said, 'We've gotta do something shocking, something that'll get people to notice what bullying can lead to.' "

Nash now promotes a Bullying Hurts program to school systems around the country.

Millions of Americans love fangs, and the living proof is the unrelenting popularity of such franchises as "Twilight" and "True Blood."

"True Blood" is based on Harris' Southern Vampire Mystery novels featuring the telepathic and fearless waitress, Sookie Stackhouse - herself a fang-lover.

It should then come as no surprise that Harris is a featured speaker┬ĀThursday at Comic-Con International, the annual festival of the supernatural and all things Spandex that's expecting some 126,000 ardent fans, beginning Wednesday in San Diego, California.

According to her website, Harris, a published novelist for┬Āmore than┬Ā25 years, is a native of the Mississippi Delta who "grew up in the middle of a cotton field."

Now living in southern Arkansas with her husband and three dogs, Harris is the past senior warden of St. James Episcopal Church and a former board member of Mystery Writers of America.