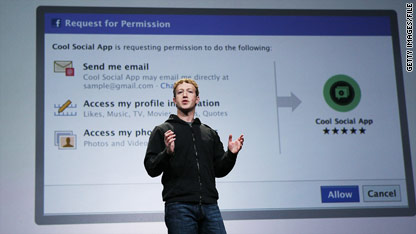 500 million - Facebook has reached its half-billion member mark, with an online population larger than the combined population of the U.S., Mexico and France. CNN.com asks who isn't on Facebook while the site's 26-year-old creator and CEO, Mark Zuckerberg, is talking about the member milestone. He also tackles the many criticisms leveled over how Facebook handles user privacy.

Going beyond Sherrod - The spotlight has not dimmed on Shirley Sherrod, the ex-USDA worker who was pressured to resign from her job Monday after a conservative blogger posted a misleading video of her discussing a white farmer. Sherrod, it turns out, has had quite an interesting life before all the brouhaha about her this week (here's a recap).

The story is still all about race, but Sherrod now appears to be saying the USDA has a history of widespread discrimination. Asked whether she would go back to working for the department, which is reportedly offering her a civil rights-related job, Sherrod said: "I would not want to be the one person at USDA that's responsible for issues of discrimination within the agency. ... There's a lawsuit by black farmers, there's a lawsuit by Hispanic and Native American and women farmers. ... There are changes that would need to happen in order to once and for all really deal with discrimination." She appears to be, in part, referring to a years-long legal battle between black farmers and the USDA.

Sherrod is considering filing a lawsuit, too, against the blogger who posted the video clip.

Bad weather, oil spill - Poor weather could jeopardize efforts to contain the Gulf oil spill. A tropical depression or tropical storm that formed near the Bahamas on Thursday morning could head into the Gulf, forecasters are saying, and the National Hurricane Center reported that it would probably initiate tropical storm warnings and watches for portions of the Bahamas and southern Florida at 11 a.m. ET.

Retired Coast Guard Adm. Thad Allen, who's leading the federal response to the spill, said a tropical storm could disrupt capping operations for 10 to 14 days.

Barefoot in court - Colton Harris-Moore, the so-called "barefoot bandit" suspect, will appear before a U.S. magistrate in Washington state at about 2:30 p.m. (5:30 p.m. ET). Â Jesse James to some, a simple criminal to others, the teenager is famous for allegedly stealing cars, burglarizing homes and stealing and crash landing airplanes. He eluded police and the FBI for two years. A CNN story later Thursday will delve into Harris-Moore's turbulent upbringing.