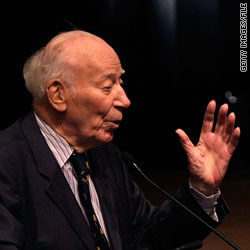 The 95-year-old veteran of West Virginia politics has filed papers to run for the seat once held by Robert Byrd, who passed away last month at the age of 92 and was the oldest member of the Senate at the time of his death.

If elected, Hechler would be 96 if he assumed the Senate seat in 2011. If he served a full term in the Senate, he would become the oldest senator in history. Sen. Strom Thurmond of South Carolina was the oldest person to serve in the Senate. He was 100 at the time of his death in 2003.

According toÂ a biography on his website, Hechler was a special assistant in charge of research for President Truman as well as research director for Adlai Stevenson, the former Illinois governor and Democratic Party nominee for president in 1952 and 1956.

Hechler told the Charleston Daily Mail he doesn't expect to win but throwing his hat in the ring is part of his campaign against mountaintop removal mining. According to the newspaper, Hechler was arrested last summer for obstructing and impeding the flow of traffic outside a Massey Energy prep plant in West Virginia.

The former Austin-area bus driver has sued the Capital Area Rural Transportation System in Texas, claiming that the transit service discriminated against him based on his religious beliefs.

The Austin American-Statesman reports that in January, Graning was assigned to drive two women to a Planned Parenthood clinic.

According to his lawsuit filed this week in U.S. District Court in Austin, Graning phoned his supervisor "and told her that, in good conscience, he could not take someone to have an abortion."

Graning, an ordained Christian minister who says he is opposed to abortion, was told by his supervisor, "Then you are resigning," the suit said.

"It's only because he voiced his religious beliefs that he was canned," Edward White III, Graning's attorney, told CNN. "Employers have a legal responsibility to at least attempt to accommodate an employee's religious beliefs."

British Prime Minister David Cameron, on his first official trip to Washington, gifted President Obama with a painting from the little-known street artist.

Britain's Guardian newspaper reports that Downing Street phoned Eine - whose real name is Ben Flynn - to say that Cameron's wife, Samantha, was a fan and asked if there was a suitable present for the U.S. president.

"A lot of my paintings have quite negative meanings, but painted in a bright and cheerful way," Eine told The Guardian. "All of those had to be written off straight away; you can't give something that might be misinterpreted."

Eine ultimately suggested his painting of the florescent-colored letters TWENTYFIRSTCENTURYCITY, stacked in seven rows on a black background.

The newspaper reports that Eine's work as a graffiti artist earned him some 15 or 20 arrests, five convictions for criminal damage and the threat of jail time.

"It's quite mad, really," says Eine of his overnight fame. "But it's OK. It's not the kind of recognition I seek or get every day, but Cameron seems quite a positive kind of guy and Obama's a dude. I would probably have had issues if it had been for Bush."

The Guardian: Ben Eine: The street artist who's made it to the White House

"Most of us live in virtual space and have political relationships in virtual space, but we rarely get to meet offline," the editor and publisher of the award-winning blog PamsHouseBlend.com told CNN on Wednesday. "It's the one time I get to meet my readers - the fans of blogs and political activists."

Spaulding writes her blog from Durham, North Carolina, where she lives with her wife, Kate. They legally married in Vancouver, BritishÂ Columbia,Â in 2004.

Spaulding says, "I often blog about difficult subjects, race being one of them, and the predominant audience are LGBT [lesbian, gay, bisexual andÂ transgender] readers. I try to make it a safe environment to talk about race, because it's a difficult topic even within the LGBT community."

Spaulding is scheduled to appear at three of the 70-plus panels during the convention to discuss "Blogging a Red State Blue," "Why Women Are the Key to the Future of Progressive Election Victories" and "Political Organizing in the Obama Era."

Spaulding, 47, says, "I'm not afraid to be wrong. It's my opinion - no one has to agree with me. I welcome dissension and difficult conversations ... as long as the conversation is civil."

New York Yankee Alex Rodriguez is poised to hit his 600th career home run soon, and the expert who runs the Major League Baseball's authentication program is about to get busier.

The Wall Street Journal reports that only six players in major league history have hit 600 or more home runs. So anything that A-Rod touches on his way to baseball history - the ball, his jersey, his cleats, everything - will be worth something to fans or charities. One expert told the newspaper that the record-breaking ball could be worth $100,000 at auction.

So after Rodriguez's next home run, No. 599, Posner will make sure that every object and piece of equipment will be specially coded with an invisible, tamper-proof hologram - to thwart the fraud and forgeries that once plagued the collectibles industry.

Posner told the Journal, "We're charged with witnessing everything under the guidelines and making sure that this is the bat that Alex Rodriguez used, these are the bases that were on the field that he touched circling the bases for 600."

According to Major League Baseball, more than 3 million objects have been authenticated since 2001.