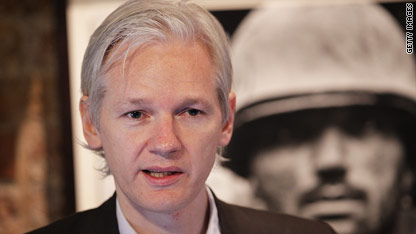 Julian Assange, founder of the WikiLeaks website, speaks to reporters.

WikiLeaks publishes and comments on leaked documents that allege government and corporate misconduct.

One of its greatest controversies involves the publication in April of a secret video taken in 2007 of a U.S. helicopter attack in Iraq that killed a dozen civilians, including two unarmed Reuters journalists.

At the time, Maj. Shawn Turner, a U.S. military spokesman, said that "all evidence available supported the conclusion by those forces that they were engaging armed insurgents and not civilians."

Pfc. Bradley Manning, 22, has been charged by the U.S. military with eight violations of the U.S. Criminal Code for transferring classified data, according to a charge sheet released by the military this week.

This month, site founder Julian Assange, who is rarely seen in public, told a TED conference that Wikileaks thoroughly vets materials on the site. Watch his TED talk

Those who defend WikiLeaks say it protects whistle-blowers, journalists and activists who want to communicate sensitive information. Critics have charged it recklessly endangers national security and the livelihoods of people whose identities must be kept secret.

A 2008, a U.S. Army Counterintelligence Center report, which was classified until it was uploaded to WikiLeaks in March, said that information posted to WikiLeaks.org could "aid enemy forces in planning terrorist attacks."

There are "legitimate secrets," Assange, 39, said at TED, including health records. But WikiLeaks deals, "with whistle-blowers that are well motivated," Assange said.

Assange has said that the organization gets material from whistle-blowers in a variety of ways - including postal mail. WikiLeaks rarely knows the identity of the source of the leak. "If we find out at some stage, we destroy that information as soon as possible," he said.

WikiLeaks operates in several countries, including Sweden and Iceland, Assange said, specifically because those nations offer legal protection to the disclosures made on the site.

Assange is considered a mystery and maintains a low profile. He said at TED that he has canceled at least three appearances in the United States, including a June talk at a national investigative journalism conference, because of what he called "unreasonable" statements that were made by U.S. officials. These statements were made in private, he said, and suggested that officials "may not follow the rule of law" in dealing with him.