What leaked documents are telling us about Afghan war 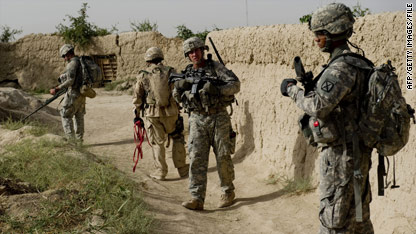 The U.S. war in Afghanistan has been drawing comparisons to the Vietnam War for many years, and WikiLeaks' publication of more than 90,000 government documents about the war in Afghanistan will give more credence to that comparison. Daniel Ellsberg, the whistleblower responsible for leaking the U.S. government's top-secret study on the Vietnam War in 1971, says that like the Pentagon Papers, these documents will not justify the ongoing war.

"I think what the Pentagon Papers showed with 7,000 pages was that there was a lack of any good reason for doing what we were doing," Ellsberg told CNN. "My strong expectation is these 92,000 pages will not convey any good reason for the dying and killing and the enormous money we're spending over there in a time we cannot afford it."

U.S. military documents released by WikiLeaks show that a U.S. Special Forces unit in Afghanistan assigned to hunt down terrorists also was responsible for the deaths of civilians, Afghan police officers and, in one particularly bloody raid, seven children while they attended school.

The unit is called Task Force 373. It’s assigned to kill so-called “high value” targets or detain them without trial, often in night operations. The 373 follows a hit list of sorts, according to The New York Times and The Guardian newspaper in England.

Training of and handing over security responsibilities to the Afghan police and military forces has been a central component of Afghanistan strategy during the last two administrations. Among the tens of thousands of documents published by WikiLeaks are a series of reports on the Afghan National Army and the Afghan National Police. The reports chronicle successes and failures of both agencies from 2004-2009.  Although both agencies have had failures, a preliminary review of the documents suggests that the ANP has more problems than the ANA.

Bruce Riedel, a senior fellow at the Saban Center for Middle East Policy in Washington DC, says that the mixed bag of results in the reports are apparent when reading raw military reporting and traffic. "If you had taken 90,000 documents from the Allied forces that invaded Normandy in 1944 until they reached V-E Day in 1945, you probably would have found the same kind of success stories and failures mixed together," Riedel told CNN.

[Original post] Whistleblower website WikiLeaks has published what it says are about 76,000 United States military and diplomatic reports about Afghanistan filed between 2004 and January of this year.

The firsthand accounts are the military's own raw data on the war, including numbers killed, casualties, threat reports and the like, according to Julian Assange, the founder of WikiLeaks.org, which published the material Sunday. On Monday Assange said the leaked reports from Afghanistan appear to contain "evidence of war crimes."

"This material does not leave anyone smelling like roses, especially the Taliban," he said, also implying that some U.S. troops had behaved improperly.

CNN has not independently confirmed the authenticity of the documents. The Department of Defense will not comment on them until the Pentagon has had a chance to look at them, a Defense official told CNN.

"The United States strongly condemns the disclosure of classified information by individuals and organizations which could put the lives of
Americans and our partners at risk and threaten our national security," the statement said.

There's a whole lot of information in the documents and we're digging through them with you to get a sense of what's in them, what new information we're learning about the war in Afghanistan, and what the big takeaways are that you need to know about.

What are we learning from the documents?

WikiLeaks released the documents to The Guardian, The New York Times and Der Spiegel before any other media outlets, and they had a chance to look ahead of time. Each news organization concentrated on different angles, but here are some highlights:

The Guardian put together an interactive map using data from the WikiLeaks documents to show and detail what it deemed were several significant events from the logs for users to examine in greater detail.

The paper also dug into many other issues the WikiLeaks material offered information about including:

On Osama Bin Laden: The Guardian examined documents that allegedly link bin Laden to several incidents between 2004 and 2009.

On Pakistan ties: Several documents that The Guardian highlights indicate the fingerprints of Pakistan's ISI spy agency on some Taliban activity.

The Times redacted material it felt would reveal suspects' identities, to protect “people in danger,” or that would “reveal key tactical military capabilities.” The Times links to an explanation of its redactions.

On Pakistan: The Times reports on documents that show Pakistan allows representatives of its secret service to meet directly with members of the Taliban in strategy meetings to organize militants to fight against Americans in Afghanistan. Plots to assassinate Afghan leaders have been discussed in these meetings, according to the documents.

On how the war is going: The Times reports a "ground-level picture of the war in Afghanistan that is in many respects more grim than the official portrayals."

Example:
- View is bleaker than official portrayal of war in Afghanistan

On fighting the insurgency: The Times tells the story of U.S. Outpost Combat Keating, opened in 2006 in the Kamdesh district of Nuristan Province to fight the insurgency. The Times reports that leaked documents show three years of frustration within the outpost including low troop levels, unreliable Afghan partners, and an insurgency that has “grown in skill, determination and its ability to menace.”

Example:
- Insurgents seen wearing government uniforms, and other times when they have roamed the country or appeared for a fight in the same Ford Ranger pickup trucks that the United States had provided the Afghan Army and police force. The trucks are described in this Nov. 2006 document.

- The Times also reports that the Taliban have used portable heat-seeking missiles against allied aircraft, a fact that has not been publicly disclosed by the military. This type of weapon helped the Afghan mujahedeen defeat the Soviet occupation in the 1980s.

On U.S. military resources: Referring to vehicles used by Americans, the New York Times reports, “For months the reports show how a third — or even a half — of the team’s vehicles were out of service, awaiting spare parts.”

On trust between U.S. and Afghan officials: In September 2007 in Paktia Province, a U.S. Civil Affairs report details a meeting that it had with unhappy Afghan district officials.

Example:
- According to the New York Times, the Afghans began a tirade, telling the Americans: “The people of Afghanistan keep loosing their trust in the government because of the high amount of corrupted government officials,” the report quoted the Afghans as saying. “The general view of the Afghans is that the current government is worst than the Taliban.”

On the "corruption" and "cultural misunderstandings” during war: The New York Times reports some of the documents show “an array of problems" occurring in Afghanistan during the war and small misunderstandings or victories that turned out to be failures.

Example: The truth about an orphanage
- The Times links to three documents about a locally funded orphanage that opened in Patkia province of Afghanistan in which the local director was given a leather jacket. The first document, dated Nov 2006, shows an American civil affairs officer enthusiastic about the orphanage’s opening. A few months later, a document describing an inspection reveals that only 30 orphans are at the center when there is supposed to be more 100. The third document, more than a year later, reveals that there are no orphans in the orphanage.

On German military problems: Spiegel looks at documents that allegedly illustrate little progress by the German troops in northern Afghanistan.

Example:
- Situation is far worse than the German government reports

So just who is WikiLeaks and exactly what did they publish?

WikiLeaks publishes and comments on leaked materials that allege government and corporate misconduct.

Assange declined to tell CNN where he got the documents. He claims the documents reveal the "squalor" of war, uncovering how many relatively small incidents have added up to huge numbers of dead civilians.

This month, Assange, who is rarely seen in public, told a TED conference that Wikileaks thoroughly vets materials on the site. Watch his TED talk

The significance of the documents, Assange told CNN, lies in "all of these people being killed in the small events that we haven't heard about that numerically eclipse the big casualty events. It's the boy killed by a shell that missed a target."

However, the team at the website WikiLeaks has itself read only 1,000 to 2,000 of the documents, Assange said Monday.