The five most popular CNN.com stories during the last 24 hours, according to Newspulse:

Ansel Adams photos found at garage sale: A California man kept two boxes he bought at a garage sale under his pool table for four years before realizing they may be too valuable to store at home.

Tragic identity mix-up brings joy, grief: The identities of two women involved in a car crash in Arizona last week were mixed up, with one family receiving news that their daughter had died when in fact she was undergoing treatment for her injuries while another family kept watch at her side for six days.

Pentagon identifies missing, dead sailors in Afghanistan:¬Ý Military officials Tuesday identified two sailors involved in a firefight in eastern Afghanistan last week that left one of them dead and the other in the hands of the Taliban.

Polygamist leader's conviction overturned:¬Ý The Utah Supreme Court has reversed Warren Steed Jeffs' two convictions on charges of rape as an accomplice and ordered a new trial, saying that instructions given to jurors were erroneous.

END_OF_DOCUMENT_TOKEN_TO_BE_REPLACED 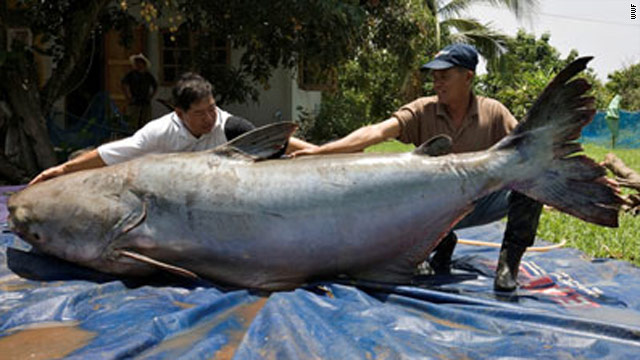 Dams proposed for the Mekong River in Southeast Asia would drive the world‚Äôs third-largest freshwater fish species to virtual extinction, according to a World Wildlife Fund report.¬Ý

Any of the 11 hydropower dams planned for the river‚Äôs mainstream south of China would prevent the Mekong giant catfish from migrating to its spawning grounds, the WWF said Tuesday in a news release.¬Ý

The catfish, with a maximum length and weight of nearly 10 feet and about 770 pounds, are too big to swim across such dams, said Dekila¬ÝChungyalpa, director of WWF‚Äôs Greater Mekong Program.¬Ý

END_OF_DOCUMENT_TOKEN_TO_BE_REPLACED

In the wake of the leak of thousands of classified documents, the U.S. Army has expanded its criminal investigation into a soldier allegedly involved in the earlier leak of a combat video and thousands of military documents, according to the Pentagon.

The expanded investigation was confirmed by Col. David Lapan at the Pentagon.

According to a U.S. military official who asked not to be named because he was not authorized to talk about the investigation, the probe by the Army's Criminal Investigation Division into Pfc. Bradley E. Manning was expanded to look at potential accomplices and what military or U.S. government systems the information came from.

Internal military documents published by WikiLeaks.org reveal conflict among Afghan security forces, including attacks on one another, as well as heavy drug use among soldiers.

The material details more than 60 "Green on Green" incidents in which Afghan military personnel were more concerned with battling each other, rather than insurgents. WikiLeaks this week published what it says are more than 75,000 U.S. military and diplomatic reports about Afghanistan filed between 2004 and January of this year. CNN has been unable to confirm that the documents are authentic.

END_OF_DOCUMENT_TOKEN_TO_BE_REPLACED

"I ain't never seen so many gators in my life."
END_OF_DOCUMENT_TOKEN_TO_BE_REPLACED

Mother of missing Oregon boy pleads for his safe return

The mother of a missing 7-year-old Oregon boy pleaded for her son's safe return Tuesday, imploring him to "never give up hope."
END_OF_DOCUMENT_TOKEN_TO_BE_REPLACED

The recently released cache of U.S. reports from Afghanistan provide fleeting glimpses into the possible whereabouts of al Qaeda leader Osama bin Laden in the years since his escape from American forces at Tora Bora.
END_OF_DOCUMENT_TOKEN_TO_BE_REPLACED

Maradona out as manager of Argentine national team 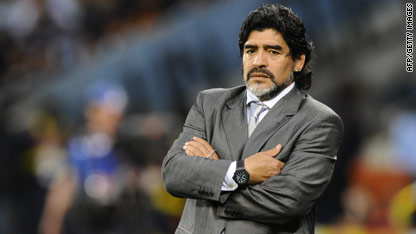 Diego Maradona's contract as coach of the Argentine national soccer team will not be renewed, the spokesman for the Argentine Football Association said Tuesday.

The announcement comes after Argentina exited the World Cup in South Africa earlier this month with a 4-0 loss to Germany in the quarterfinals.

END_OF_DOCUMENT_TOKEN_TO_BE_REPLACED

"The task that's laid out before us is very clear right now," the man in charge of the federal Gulf of Mexico oil crisis response said Tuesday.
END_OF_DOCUMENT_TOKEN_TO_BE_REPLACED

The man convicted of videotaping her through a hotel peephole was sentenced to two years in prison, ESPN reporter Erin Andrews said Tuesday, but in a way, she was sentenced to a lifetime of looking over her
shoulder.

"The one thing that I think is very, very sad about the whole ordeal is, he's going to jail for a little over two years," said Andrews, who appeared with members of Congress on Tuesday in support of legislation to strengthen federal stalking laws. "That video on the Internet will be there for the rest of my life."

Someday, she said, she will need to explain the video to her future husband and children.

President Barack Obama said Tuesday that he is "concerned about the disclosure of sensitive information" about the U.S. mission in Afghanistan by the whistle-blower website WikiLeaks.

But the documents included in the disclosure don't shed much new light on the war, he asserted.

The administration has been critical of the decision by WikiLeaks to publish what it said are about 76,000 U.S. military and diplomatic reports about Afghanistan filed from 2004 to January 2010.

The Utah Supreme Court has reversed Warren Steed Jeffs' two convictions on charges of rape as an accomplice and ordered a new trial.

After a highly publicized trial in Utah in 2006, Jeffs was convicted on two counts of being an accomplice to rape. He was accused of using his religious influence over his followers to coerce a 14-year-old girl into marrying her 19-year-old cousin. He was sentenced to two consecutive prison terms of five years to life.

Apple's gadget fans got plenty of new toys recently, with the launch of the iPad and iPhone 4. Now, it's the power users' turn.

END_OF_DOCUMENT_TOKEN_TO_BE_REPLACED

Truckers shaken down from both sides in Afghanistan, reports show

Truckers moving vital supplies along the roads of war-torn Afghanistan have faced shakedowns by both the Taliban and Afghan authorities, with Taliban fighters charging up to $500 for safe passage, leaked U.S. military reports show.

It said the negotiations were conducted in Quetta, the city in northwestern Pakistan where the Taliban is believed to have set up a kind of government-in-exile while it fights U.S. troops in Afghanistan. Local contractors coroborrated the information, "and the other companies state they are paying money for safe passage," the November 2007 report states.

The report was among the more than 75,000 documents released Sunday by the online whistleblower site Wikileaks. It is just one of several reports documenting the problems faced by drivers across Afghanistan, where U.S. and allied troops have been battling the Taliban for nearly nine years. END_OF_DOCUMENT_TOKEN_TO_BE_REPLACED

All out effort to find missing soldier, documents show

When U.S. Army Pfc. Bowe Bergdahl was first discovered missing from his base in southeastern Afghanistan last summer, the commander of his unit quickly ordered "all operations will cease until missing soldier is found."

"All assests will be focused on the DUSTWUN (duty status - whereabouts unknown) situation and sustainment operations," according to one of the 90,000 secret military reports released this week by WikiLeaks.

It was 4:30 a.m. on June 30, 2009 when Bergdahl was first reported missing. By 7 a.m., units started moving into "blocking positions to try and find missing U.S. soldier," the report said. At the same time, three different types of unmanned aerial vehicles and a U.S. army reconnaissance plane as well as other aircraft were brought in to search from above. A military dog handler was brought in as well to help find Bergdahl. END_OF_DOCUMENT_TOKEN_TO_BE_REPLACED

A report among the 90,000 secret U.S. military documents published by a whistleblower website over the weekend shows the confusion that led to what turned into a controversial attack in Kunduz, Afghanistan.

One leaked document shows how NATO troops were very mistaken in a deadly air attack on two stolen fuel tankers last year. The NATO troops knew that two tankers had been stolen by the Taliban and had found that they were stuck in a river that the Taliban drivers were trying to cross.

The commanders overseeing the mission believed 70 insurgents had surrounded the trapped tankers. The report says "after ensuring that no civilians were in the vicinity" the commanded ordered both trucks bombed and destroyed. END_OF_DOCUMENT_TOKEN_TO_BE_REPLACED

Incoming BP chief executive 'sure there will be changes'

The American set to take over BP said Tuesday that in the aftermath of the Gulf of Mexico oil disaster, he's "sure there will be changes" in the oil industry.

"There's no question we're going to learn a lot from this accident in the Gulf coast. It's going to be about equipment, people, different companies, and as a result of that, we're going to learn a lot, both BP and the industry," Robert Dudley told reporters outside BP headquarters in London as he emerged alongside BP Chairman Carl-Henric Svanberg and outgoing Chief Executive Officer Tony Hayward. 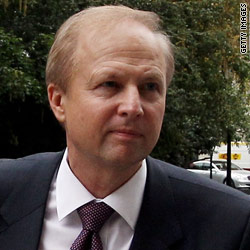 The Mississippi-born chemical engineer will be the first American chief executive officer of BP Worldwide.

Tuesday, BP announced that Dudley will replace the firm's British executive Tony Hayward, following¬Ýcriticism of¬ÝHayward's¬Ýinitial response to the Gulf of Mexico oil disaster, and a resulting $17 billion loss directly tied to the event. Hayward has been reassigned to TNK-BP, a Russian oil and gas venture, where Dudley served for five years, departing in 2008. The change is scheduled for October 1.

Currently the managing director for the oil giant's U.S. operations, Dudley took over the cleanup efforts on day 49. Ironically, Dudley was originally passed over as BP CEO¬Ýin favor of¬ÝHayward in 2007, the Wall Street Journal reported. At the time, Dudley had run TNK-BP Russia for five years. In 2008, Russian shareholders drove him out, the paper said.

In his new role, Dudley will be expected to continue working closely with White House and Gulf Coast officials on resolving the oil spill crisis.

"My own personal priority is to listen to the people, the claims centers, the officials and to make sure that we can get the resources and get them there as fast as we can," Dudley said in an interview with CBS last month.

END_OF_DOCUMENT_TOKEN_TO_BE_REPLACED

3:49 pm ET December 5, 2022 RETWEET
Hearing aids might be an important tool in the effort to prevent cognitive decline and dementia, according to a new‚Ätwitter.com/i/web/status/1‚Ä¶63
cnni

2:03 pm ET December 5, 2022 RETWEET
Croatia defeats Japan in a penalty shootout to advance to the World Cup quarterfinals. After 120 minutes of play,‚Ätwitter.com/i/web/status/1‚Ä¶20
cnni

3:49 pm ET December 5, 2022 RETWEET
Hearing aids might be an important tool in the effort to prevent cognitive decline and dementia, according to a new‚Ätwitter.com/i/web/status/1‚Ä¶63
cnni

2:03 pm ET December 5, 2022 RETWEET
Croatia defeats Japan in a penalty shootout to advance to the World Cup quarterfinals. After 120 minutes of play,‚Ätwitter.com/i/web/status/1‚Ä¶20
cnni