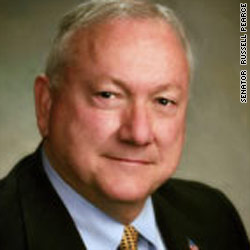 The Arizona state senator and co-author of SB 1070 says he'll appeal a U.S. District Court decision blocking parts of the controversial immigration law and, if necessary, will appeal decisions all the way to the United States Supreme Court.

A profile published Wednesday by The Arizona Republic indicates that Pearce’s persistence has been built by his years as a survivor. He endured a childhood of poverty in Mesa, Arizona. As a sheriff’s deputy, he survived a 1977 fight with three Latino teenagers that resulted in his losing a finger and being shot in the chest. Decades later, an illegal immigrant nearly killed his son, who was also in law enforcement. (Pearce told the paper neither event shaped his views on immigration.) In 2001, Pearce survived a heart attack and stroke that left him with slurred speech and impaired walking. He campaigned for state senator even though he struggled to walk with a cane.

The piece describes Pearce’s political development. A prominent member of the Church of Jesus Christ of Latter-day Saints, Pearce is described as a follower of Mormon theorist W. Cleon Skousen. Skousen — often quoted by Fox News host and fellow Mormon Glenn Beck — taught that the Founding Fathers were inspired by God when they wrote the Constitution. "I believe [the Constitution] was inspired by God by our Founders to put together the freedom-loving constitutional republic that we have,” Pearce said. "I believe in recognizing certain God-given rights. I've believed that from a young age."

Critics describe Pearce as a stubborn negotiator and fierce opponent. Some go so far as to suggest that he is untruthful. Pearce remains undaunted. He told The Republic he is a man who helped create "a better place for folks who live in America, that love freedom, appreciate the founding principles of this country.” “"The candle of liberty," he said, "has always been kept lit by a vigilant few."

The deputy chief of Arizona’s Maricopa County sheriff’s office will oversee the unit’s training programs for enforcing the parts of SB 1070 that go into effect on Thursday. Chagolla is a former spokesman for controversial Maricopa County Sheriff Joe Arpaio. He is the first Hispanic in the history of the sheriff’s office to have achieved the rank of deputy chief. He oversees all of the county’s training programs.

A sergeant who rose to the rank of captain, Chagolla was known for his abrupt manner during his six years as Arpaio’s spokesman. The liberal newspaper The New Times of Phoenix called Chagolla “Sheriff Roadblock” and criticized the lack of information flow through the department. “He did the best that could do under very difficult circumstances,” said Maricopa County media relations director Lisa Allen in 2008 when Chagolla was promoted to deputy chief. “But I think there are a lot of people in the media that are glad to see him go.”

AZ Central.com: How would immigration scenarios play out in real life?

The U.S. district judge has placed a partial injunction on the portion of SB 1070 that requires law enforcement to inquire about a person’s immigration status if there is reason to believe the person is in the country illegally. Bolton was recommended by Republican Sen. Jon Kyl before she was nominated as a judge by President Clinton, according to a profile by Phoenix's Fox 10 News.

Described as tough but impartial, Bolton was tasked with assessing six lawsuits filed against Arizona over the bill — including the federal government’s challenge. Opponents of her decision will now appeal to the 9th Circuit Court of the United States. Bolton's decision left standing sections of SB 1070 that allow Arizona authorities to stop day workers from lining up on city streets; provide for sanctions for employers who hire illegal immigrants; and forbid so-called sanctuary cities from providing haven to illegal immigrants within the state of Arizona. Still, some supporters of the law say the damage is done. “She has stopped the heart of this bill,” Republican attorney general candidate Andrew Thomas told CNN. Thomas advised Russell Pearce as he drafted SB 1070.

My foxphoenix.com: Profile: Who is U.S. District Judge Susan Bolton?

The grandson of famed photographer Ansel Adams does not believe that a cache of glass negatives was taken by his grandfather. Adams, who runs the Ansel Adams Gallery, said the evidence supporting the claims of a team of experts is purely circumstantial. “I don’t think that they’ve proven that they are (authentic),” he said. “… And I don’t know that you could ever prove that they are."

Last year, Adams was shown the data collected by commercial painter Rick Norsigian. Norsigian purchased the 60 glass negatives in 2000 for $45 at a garage sale. Adams — immediately skeptical — said he wanted more evidence, including carbon dating, to prove the glass negatives were real. He also doubted that notations on the folders containing the negatives and attributed to his grandmother were really in her handwriting. “I just looked at them myself,” Adams said. “I did not hire experts."