The House select committee investigating the January 6, 2021, attack on the US Capitol has decided to make criminalŌĆtwitter.com/i/web/status/1ŌĆ”8v

Venezuelan President Hugo Chavez has deployed troops to areas near the Colombian border and says he is reviewing plans for a potential war as tension between the two nations rises.

"Three nights ago I told the vice president. It makes me sad, I confess, that I'm reviewing war plans," he said during a phone interview on the state-run VTV network.

Special forces are moving to 10 districts near the Colombian border to be prepared in case Colombian President Alvaro Uribe issues an invasion order before he leaves office August 7, Chavez said Friday.

Colombia and Venezuela are at odds over accusations that leftist rebels have found refuge in Venezuela.

Military officials told CNN that Pfc. Bradley Manning is also the prime suspect in the latest leak of documents to the WikiLeaks website.

Manning arrived at 9:30 p.m. Thursday at the Quantico detention facility and was given a physical exam and medical screenings, according to Lt. Col. Rob Manning (not related) of the Military District of Washington.

While in custody the suspect is being observed in accordance with normal operating procedures, according to a military spokesman.

Rapper Kanye West, who some are saying has the funniest Twitter feed of all time, has been on the popular social networking site for all of four days and amassed more than 345,000 followers.

With celebrities and big brands, that kind of stuff usually happens. In April 2009, CNN and actor Ashton Kutcher battled to see which Twitter account would top 1 million followers the fastest.

What doesn't happen is when a celebrity who is following no one picks you as the sole person he or she is following.

For West, that person is an obscure Twitter account assigned to Steven Holmes of Coventry, England, aka ste_101.

END_OF_DOCUMENT_TOKEN_TO_BE_REPLACED

[Update 9:27 p.m.] Arizona authorities are hunting for three convicted murderers who may well be out of state or on their way to Mexico, a corrections official said Saturday.

The Arizona Department of Corrections and the Flagstaff police said on
Saturday that the three disappeared from a medium-security facility near Kingman by cutting a hole in a fence. They are considered to be armed and dangerous.

The escaped inmates were discovered missing after a 9 p.m. count in prison.

Police said the convicts are with a woman who helped them escape. 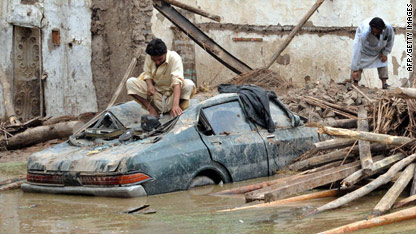 A car is swamped and a house collapsed in Pakistan's Nowshera district.

The death toll from flooding caused by monsoon rains in Pakistan has risen to at least 800, the information ministry in the province of Khyber Pakhtunkhwa said.

Many of the victims died when floodwaters swept away hundreds of mud houses in parts of Swat Valley and the districts of Shangla and Tank, according to Bashir Ahmed Bilour, a provincial minister in Khyber Pakhtunkhwa.

Rushing water also has washed away thousands of acres of crops and dozens of government buildings, local businesses and schools, Bilour said.

12:57 pm ET December 6, 2022 RETWEET
Scientists behind a new study may have found the biological reason we get more respiratory illnesses in winter. ItŌĆtwitter.com/i/web/status/1ŌĆ”hX
cnni

12:57 pm ET December 6, 2022 RETWEET
Scientists behind a new study may have found the biological reason we get more respiratory illnesses in winter. ItŌĆtwitter.com/i/web/status/1ŌĆ”hX
cnni

11:20 am ET December 6, 2022 RETWEET
The House select committee investigating the January 6, 2021, attack on the US Capitol has decided to make criminalŌĆtwitter.com/i/web/status/1ŌĆ”8v
cnnbrk