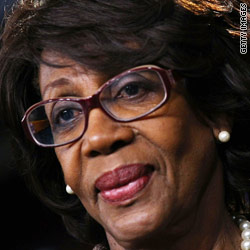 The veteran Democratic congresswoman and civil rights activist from Los Angeles will face a House ethics trial that may cause tensions between the Democratic leadership and the Congressional Black Caucus.

Waters, who is accused of seeking preferential treatment for OneUnited Bank of Massachusetts, is being investigated by the Office of Congressional Ethics, a panel that Democratic leader Nancy Pelosi hopes will "drain the swamp" of ethical issues in Congress. Waters' husband has ties to the bank, the Los Angeles Times reports.

The Office of Congressional Ethics has accused Rep. Charlie Rangel, D-New York, of 13 ethics violations, and it has investigated at least six other members of the Congressional Black Caucus, the Times reported.

The investigation "fuels the racial dimensions," ethics attorney Ken Gross told the Times. "It's going to be so highly charged considering who the players are."

The young brunette exile has told The New York Times in a first-time interview that in the days after protests in Iran in June 2009, officials tried to force her to go on state-run television to deny the death of another Iranian woman, Neda Agha-Soltan, a 26-year-old protester who quickly became the symbol of the Iranian protests when her death was captured in a video that appeared on YouTube.

Soltani, who resembles Agha-Soltan and is also called Neda, told the Times that she was a politically inactive 33-year-old English literature instructor at Islamic Azad University in Tehran on June 20, 2009, when Neda's death became public on YouTube. Someone used Soltani's photo from her Facebook page and identified her as the 26-year-old protester. Complicating matters more was that both women were affiliated with the university.

On June 24, Soltani said, Iranian intelligence tracked her down and began pressuring her to deny Neda's death.

"They asked me to say on camera that I was still alive and that the Greek Embassy in Tehran had leaked my picture to the media and that the story was wrong," Soltani said.

She said the intelligence agents also wanted her to blame conspirators from the West for the episode and urged her to cooperate or else.

Panicked, Soltani contacted Amnesty International and the Greek Embassy. By July 1, carrying only a backpack, her computer and her purse, Soltani fled Iran for Greece. She now resides, in hiding, in Germany.

The '70s-era rock star and ultraconservative advocate has written an op-ed in Friday's Washington Times comparing President Obama to China's Mao Zedong ("Maobama") and calls the U.S. government "Fedzilla," yet he says that conservatives have no one to blame but themselves.

"It is the terminal curse of apathy and disconnect that got us into this shameless mess we find America in today," Nugent said. "Welcome to the new fat, soft, cowardly nation of wimps with the perfectly corrupt president and pack of soulless hounds in government that they deserve."

The Washington Times: Nugent: It is us

The U.S. Coast Guard veteran and quadruple amputee was named the Disabled Veteran of the Year on Saturday at the Disabled American Veterans annual convention in Atlanta.

Riley, a rescue swimmer who enlisted in 1984, lost all of his limbs to a bacterial infection in 1998.

Riley was among the first to complete the Coast Guard's Aviation Survivalman School and Navy Helicopter Rescue program in 1986. He served in San Francisco and became qualified to conduct rescues in four kinds of helicopters.

Coast Guard Adm. Bob Papp was on hand to praise Riley, acknowledging the strength of both his character and body to endure such challenges.

The legendary television actor of both Mayberry and "Matlock" fame is now the face of a television ad explaining how the new health care reform laws will affect and improve the Medicare program.

In the 30-second spot, Griffith, 84, praises the year 1965, when Medicare became law. He then describes the benefits of the program, including free health screenings and more ways to prevent fraud.

"See what else is new," the actor says. "I think you're going to like it."

In 2008, Griffith and Ron Howard, who played Griffith's son Opie on "The Andy Griffith Show," issued a video endorsing presidential candidate Barack Obama. The health care ads will air on networks such as CNN and the Hallmark Channel.

This week, the British biographer has released a book about Angelina Jolie that could reignite  the actress's reputation as the woman who stole Brad Pitt from Jennifer Aniston.

The book, "Angelina: An Unauthorized Biography," is short on attribution, reports The New York Times, yet long on details about the controversial actress/mother/humanitarian.

Celebrity trysts between Jolie and people such as Leonardo DiCaprio, Ralph Fiennes and model Jenny Shimizu are recounted, as are the actress's woes with her father, Jon Voight. Also detailed: Jolie's time cutting herself and allegations of heroin abuse in the 1990s.

Morton has written other unauthorized celebrity biographies. In 2008, he detailed Tom Cruise's life, with details about the Church of Scientology. Morton is best known for his work about Princess Diana, who later admitted to collaborating with the author on the work.