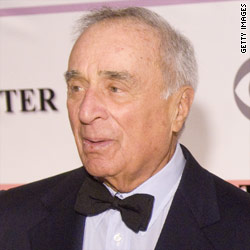 Making a profit, Harman told Newsweek staffers on Monday, is not part of the plan.

"I would be delighted over a period of a few years to see Newsweek get by on its own fuel,” he said. “Break even is a serious accomplishment in this environment. I’m not here to make money. I’m here to make joy."

Harman became wealthy by selling stereo equipment beginning in the 1950s. According to the Wall Street Journal, Harman Industries was once a billion-dollar corporation specializing in home theaters and high-end audio equipment for automobiles. He retired as CEO and chairman three years ago.

Graham allegedly chose Harman because he committed to keeping his hands off the magazine’s editorial direction and maintaining at least 250 members of Newsweek’s current staff. Newsweek’s editor Jon Meacham agreed to leave the magazine when it went up for sale in May, Newsweek reported.

"Sidney is a quality man, a man who cares, and a man who will be trying with all his power to shape a successful future for Newsweek," Graham told staffers.

Rumors are swirling that DioGuardi has been fired as an “American Idol” judge two years after replacing her mentor, Paula Abdul, on the show. Co-host Ellen DeGeneres has announced that she is leaving after just one season, and speculation is that Fox will be adding Jennifer Lopez and Aerosmith’s Steven Tyler to the mix.

Randy Jackson, the remaining original judge, is expected to return. A Fox spokesman declined to comment on DioGuardi.

The songwriter/producer has written more than 400 songs, according to Biography.com. She has worked with artists including Christina Aguilera, Kelly Clarkson, Ashlee Simpson, the Jonas Brothers and Britney Spears. She was a vice president at Warner Records when she joined “American Idol.”

The couple’s 16-year-old twin sons, Alan and Brian, were diagnosed in 2001 with the kidney disease focal segmental glomerulosclerosis. When Alan's kidneys failed in 2009, de Vale was able to give him one of his kidneys, according to the New York Daily News.

When Brian's condition worsened, Leavy wanted to do the same for her son, but she was ruled out as a donor because she had gestational diabetes when she was pregnant, the Daily News reported. She needed to lose 15 ponds in order to be a donor.

Rather than watch her son go through dialysis or wait for the right organ match, she changed her lifestyle. She cut junk food from her diet, ate only wheat grains, brown rice and steamed vegetables, and began walking regularly.

"I felt panicked," Leavy said. "I was determined that I would have to do it. There was never a doubt."

Brian had his surgery in July.

The New York Times has reported that the 44-year-old Berkeley, California, native is one of nine influential Muslim scholars who has appeared in a YouTube video denouncing militant Islam.

"Islam teaches a balance in all of our affairs, so it's not a religion that is amenable to extremism," Shakir said in the video that launched this week.

Militants have been highly unsuccessful with acts of violence, particularly against civilians, Shakir said. They have contributed to "one mess after another," he said.

Shakir was raised during the U.S. civil rights movement and converted to Islam while serving in the Air Force, according to his biography. He teaches Islamic and Arabic courses at the Zaytuna Institute in California.

The Iranian-born, California-raised actor and comedian has been touring the Middle East, performing his stand-up act in Beirut, Bahrain, Egypt and Saudi Arabia, according to the Los Angeles Times.

In his routine, Jobrani often points out the commonalities between cultures.

All cultures like to laugh at themselves, especially their issues with traffic, Jobrani told the Times.

“If traffic were a video game, Egypt would be the advanced level.” Jobrani recently told a crowd of Egyptians.

“I’m trying to steer clear of fatwas,” he said.

Jobrani was 6 years old when his family left Iran for Tiburon in Northern California, the Times reported. He is a graduate of the University of California-Berkeley, and he attended UCLA for graduate school.

He has appeared in films including "The Interpreter" and the ABC program "Better Off Ted.” In January, he released a comedy DVD, “Brown and Friendly.”

A founding member of the “Axis of Evil” comedy tour, Jobrani toured with a group of Middle Eastern performers in 2007. The King of Jordan attended a show.

"It's been important for me … to do these shows because it shows the world that the people of the Middle East are global citizens and appreciate laughter just like anyone else," Jobrani said. "It helps bring the East and West closer with laughter. Kind of a comedic diplomacy."