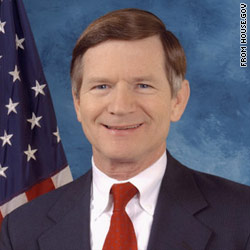 While Republican senators, including Mitch McConnell and Jon Kyl, propose a review of the 14th Amendment as an illegal immigration solution, Texas Republican Lamar Smith, currently the ranking Republican on the House Judiciary Committee, believes the issue of ŌĆśbirth citizenshipŌĆÖ can be more easily resolved.

Smith has made this argument since the mid 1990s. In a 1995 San Diego Union Op-Ed, and a recent discussion with Politico, SmithŌĆÖs case has been consistent.

ŌĆ£The granting of automatic citizenship comes from a misinterpretation of the 14th Amendment,ŌĆØ he said. ŌĆ£It was drafted after the Civil War to guarantee that the recently freed slaves gained full citizenship rights. When it was enacted in 1868, there were no illegal immigrants in the United States because there were no immigration laws until 1875. So drafters of the Amendment could not have intended to benefit those in our country illegally.ŌĆØ

Smith is one of 93 co-sponsors for The Birthright Citizen Act, introduced in the House last year, which would change the issue via statute.

ŌĆ£Passing a law to eliminate birth citizenship would help deter illegal immigration,ŌĆØ Smith wrote in the 1995 op-ed piece, ŌĆ£and reduce the burden on the taxpayer of paying for illegal immigrantsŌĆÖ education, health care, and other government benefits.ŌĆØ

The Atlantic: 14th Amendment: Part of the GOP's immigration agenda?

The vice president of Hartford Distributors survived being shot at by Omar Thornton - twice.

Hollander told The New York Daily News that at about 7 a.m. on Tuesday, heŌĆÖd confronted Thornton, an employee, with a videotape showing him stealing beer and asked Thornton to resign. "He was cool and calm. He didn't yell. He was cold as ice," Hollander said.

After Thornton quietly signed his resignation papers, he was being escorted out when he pulled out a gun and started shooting, Hollander said.

"By just the grace of God, I don't know how he missed me,ŌĆØ said Hollander, who was grazed on the arm and jaw. Hollander said he believes that Thornton may have had the gun in his lunch bag.

"He was just shooting at anyone that was near him," Hollander said.

The New York Times describes the distribution company as a family operation that has been running for 60 years. HollanderŌĆÖs grandfather incorporated the operation in 1944, The Times said, and his father and brother have long served as executives. The Hollanders are key figures in HartfordŌĆÖs philanthropic circles, The Times said.

New York Times: At company, a culture of family and charity

Nearly ten years after they opposed one another in the historic U.S. Supreme Court case of Bush v. Gore, the two constitutional lawyers are on the same side in a challenge to Proposition 8, California's voter-approved ban on same-sex marriage.

A federal judge is expected to rule Wednesday on whether the ban - which defines marriage as a union between a man and a woman - violates the U.S. Constitution by creating separate classes of people with different laws for each.

Boies and Olson - who are from opposite ends of the political spectrum - say it violates the 14th Amendment, which says, ŌĆ£No State shall make or enforce any law which shall abridge the privileges or immunities of citizens of the United States; nor shall any State deprive any person of life, liberty, or property, without due process of law; nor deny to any person within its jurisdiction the equal protection of the laws.ŌĆØ

Olson served as U.S. solicitor general during the George W. Bush administration. He has served in every Republican administration since Ronald Reagan's.

Boies successfully argued during the Clinton administration the U.S. case that Microsoft was violating federal antitrust statutes. Later in his career, he won a case arguing that NASCAR wasnŌĆÖt operating as a monopoly.

Both Boies and Olson were named to Time MagazineŌĆÖs "100 Most Influential People" list earlier this year.

The 15-year-old diabetic from Memphis, Tennessee, has a service dog named Snap who guards BlacŌĆÖs life by helping him detect and manage his blood sugar.

The specially trained dog is a retriever-boxer mix that can detect blood-sugar levels from a diabeticŌĆÖs body scent.

Blac, pronounced ŌĆ£Blake,ŌĆØ got Snap in June from the nonprofit group Canine Assistance Rehabilitation Education and Services, which is based in Concordia, Kansas.

The family saw what Snap could do on the very first night he moved in.

"It was the middle of the night and Snap came into our bedroom and put his head on the bed to let me know something wasn't right with Blac," HughesŌĆÖ mother, Delores Church, told the Memphis Commercial Appeal. "And sure enough when I went into his room, his blood sugar level was extremely low.ŌĆØ

While BlacŌĆÖs entire extended family is aware of SnapŌĆÖs role as a service dog, Church said many businesses will not allow Snap inside, since heŌĆÖs not a Seeing Eye dog.

"I know some people aren't dog people, but Snap is more than just a dog; he can save my son's life," Church said. "Wherever we go, we are happy to explain what Snap does for my son."

The president of the United States will spend part of his 49th birthday in his own house in Chicago, Illinois, without his wife and family, who are traveling.

According to The Chicago Sun Times, Obama will dine with old Chicago friends before retiring to his home. On Thursday, he'll tour a Ford plant on the city's South Side.

When asked about the presidentŌĆÖs graying hair, White House press secretary Robert Gibbs acknowledged the physical and mental toll on the president from two wars and "the greatest economic calamity since the Great Depression."

ŌĆ£But I know he greatly enjoys it, and it will just require him to get more frequent haircuts," Gibbs said.

Chicago Sun-Times: How Obama will celebrate his 49th birthday in Chicago