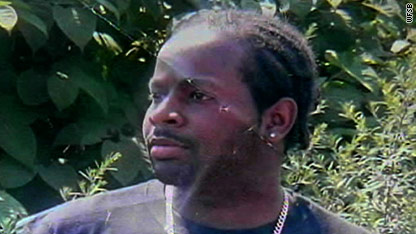 Witnesses say Omar Thornton began shooting at his office after he was given the choice to be fired or resign.

Omar Thornton, 34, walked into a room early Tuesday at the beverage distributorship where he worked in Manchester, Connecticut.

It was around 7 a.m. - shift change time. Workers were filing in and out of the office.

Inside an office room, company and union officials played a video. Thornton calmly watched images that purportedly showed him stealing from a truck.

An employee of Hartford Distributors for two years and a driver for one, Thornton was given a choice of resigning or being fired, union and company officials said. He signed a resignation paper, was escorted out of the room and toward the door.

Then, company CEO Ross Hollander told CNN, he asked for a drink of water.

Moments later Thornton pulled out a handgun and began firing, officials said. Police believe he had brought two 9mm handguns to the building in a lunchbox. In the kitchen, he pulled out the guns and shot his two escorts.

"Then he went out on this rampage," company vice president Steve Hollander told The Associated Press. "He was cool and calm.

"He didn't yell. He was cold as ice. He didn't protest when we were meeting with him to show him the video of him stealing. He didn't contest it. He didn't complain. He didn't argue. He didn't admit or deny anything. He just agreed to resign. And then he just unexplainably pulled out his gun and started blasting."

Marissa Busiere, a receptionist, told WFSB she heard another co-worker screaming as shots rang out.

Thornton "went through the whole building in a very short amount of time" as workers cowered under desks and in "nooks and crannies" and 9-1-1 calls poured in, police officials said.

At least 50 people, and as many as 100, could have been in the office around the time, workers told the media.

Within minutes, the gunman and eight other people were dead, and two others were wounded, according to Manchester police and a union official.

Thornton told his girlfriend he had reported to a company supervisor and a union representative about racial harassment at work but they did nothing about it, Joanne Hannah said Tuesday. Hannah said Thornton showed her daughter, Kristie, a cellphone photo of racial epithets and a stick figure with a noose around its neck drawn on a restroom stall. He was in a stall once and heard a co-worker say "they wanted that n-– out of there," she said.

She said Thornton was one of two black employees.

"This poor guy got pushed to the limit," she said.

Family members said he had told them about the incident - but because Thornton was such a calm and collected guy, they had no idea he would react with violence.

Teamsters officials deny allegations that Thornton, who was black, snapped because of racial harassment.

Shortly after the shootings, Thornton’s mother told CNN affiliate WFSB that she received a phone call shortly after 7 a.m. Tuesday. It was her son - and he told her he had just shot several people and planned to kill himself. She told WFSB she tried for about 10 minutes to plead with him not to go through with it - but it didn't work.

"He said, ‘I killed the five racists that was there bothering me, Will Holliday, Thornton’s uncle, told WFSB. “He said, ‘That’s it. The cops are going to come in so I’m going to take care of it myself.’”