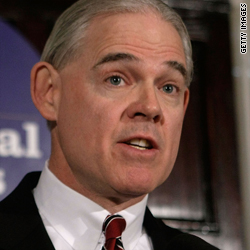 Cooper, an attorney who represented proponents of the measure, argued that the plaintiffs were attempting to override the wishes of California voters, and that the issue is a state matter that shouldn’t be decided in a federal courtroom.

Cooper said at trial that marriage should be a union between a man and a woman, and it is essential to the “survival of the species,” according to a report in the San Francisco Public Press.

"Moral disapproval alone is an improper basis on which to deny rights to gay men and lesbians," Walker wrote in a 136-page decision. "The evidence shows conclusively that Proposition 8 enacts, without reason, a private moral view that same-sex couples are inferior to opposite sex couples."

The 19-year-old Afghan woman was mutilated by her husband, her ears and nose cut off in what she calls an act of Taliban justice for the crime of shaming her husband’s family.

"I was a slave," she said. At 16, she was handed over to her husband's father and 10 brothers, who she says were all members of the Taliban.

She ran away but was caught by police in Kandahar. Her father-in-law found her, and she was tried in a Taliban court for dishonoring her husband's family and bringing them shame. The court ruled that her nose and ears must be cut off, an act carried out by her husband in the mountains of Oruzgan, where they left her to die.

With the help of an American provincial reconstruction team in Oruzgan and the organization Women for Afghan Women, she received help and protection. The Grossman Burn Foundation in the United States will provide her with reconstructive surgery.

Time: Afghan women and the return of the Taliban

The Obama appointee will be the first American representative to attend the Japanese annual memorial ceremony commemorating the August 6, 1945, bombing of Hiroshima.

Roos, the U.S. ambassador to Japan, will attend the ceremony Friday "because it is the right thing to do," U.S. State Department spokesman P.J. Crowley said.

While no formal apology will be made, the ambassador will be there to recognize the suffering of all involved, Crowley said.

"The Japanese government welcomes this," Chief Cabinet Secretary Yoshito Sengoku said Wednesday. "The event will become an opportunity for major nations' officials to deepen their understanding of our desire for nuclear disarmament and resolve never to allow the misery of A-bomb attacks to be repeated."

The supermodel testified Thursday in the war crimes trial of former Liberian President Charles Taylor, who is charged with crimes against humanity, including murder, sexual slavery and violence, and enslavement. He has pleaded not guilty.

Prosecutors say Taylor gave Campbell a diamond during the brutal war in neighboring Sierra Leone, contradicting Taylor's testimony that he never handled the precious stones - or blood diamonds - that fueled the conflict.

Campbell, 40, told a special tribunal in The Hague, Netherlands, that she received a gift of "dirty-looking stones" that she assumed was from him. She said she was handed the stones following a dinner hosted by Nelson Mandela in 1997.