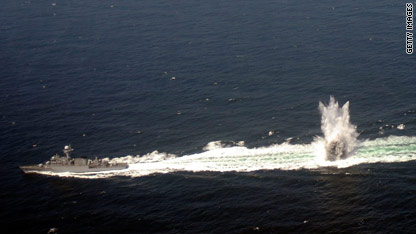 A South Korean navy ship participates in drills in the Yellow Sea this week.

Just two weeks after joint drills with the U.S. Navy, South Korea's military is carrying out five days of military exercises in the Yellow Sea.

The South Korean navy, army, air force and marines are practicing techniques for detecting and evading North Korean submarines and guided missiles, South Korea's Yonhap news agency reported Saturday. The exercise involves 20 ships and 4,500 troops, according to Yonhap.
The sinking of a South Korean warship in late March, in which 46 sailors died, was attributed to a North Korean submarine attack. The North calls the accusation "a fabrication."

North Korea said Friday it would "react with strong physical retaliation to the anti-submarine drill to be staged by the group of traitors in the West Sea," according to the official Korean Central News Agency.

"Our warnings are not empty rhetoric," said Rodong Sinmun, the newspaper of the North's ruling Workers' Party, according to Yonhap.