Three boaters in South Florida have made it back to worried friends and family on dry land, three days after they went missing when their 32-foot boat broke down during what was supposed to be a one-day fishing trip 20 miles off of West Palm Beach.

The trio - identified as John Land, 48, David Blakeney, 39, and Kevin Wood, 45, all from the local area - and their disabled Shade Maker were spotted Saturday night by a U.S. Navy frigate 85 miles east of Jacksonville, according to the U.S. Coast Guard.

After hiking along the Amazon River for more than two years, Ed Stafford is suddenly in a rush.

The native Brit, who set out to become the first person to walk all of the river's roughly 4,000 miles more than two years ago, is hoping to finish his hike on Monday, in time to catch his scheduled flight home to Leicestershire from Brazil.

Despite collapsing from exhaustion on a roadside Sunday morning, Stafford is confident he'll make the plane.

The undersea gusher in the Gulf of Mexico has been brought under control, but the worst oil spill in U.S. history will continue to be felt along the Gulf Coast for some time, Obama administration officials said Sunday.

Police: Arizona escapees may be in Yellowstone area

Authorities believe two Arizona prison escapees and their alleged accomplice may be in the Yellowstone National Park area of Montana and Wyoming, based on recent information, the U.S. Marshals Service said Sunday.

John Charles McCluskey, 45, and Tracy Province, 42, are described as armed and dangerous. They have been at large since fleeing an Arizona prison on July 30. A third escaped inmate, Daniel Renwick, 35, was arrested the day after the escape in Rifle, Colorado, where he got in a shootout with police. 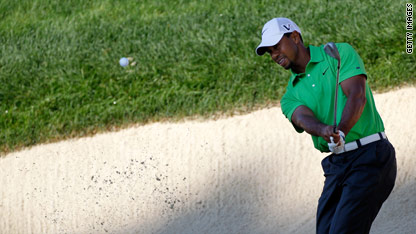 Tiger Woods shot a 7 over par 77 on Sunday in the final round of the World Golf Championships - Bridgestone Invitational to complete his worst tournament as a professional at 18 over par.

"I don't see how it can be fun shooting 18 over especially since my handicap is supposed to be zero," Woods said after the round in which he carded six bogeys and two double bogeys. It was his worst round of the four day tournament and tied his worst final round as a pro.

"It's nice that the tournament's over and we can focus on next week," the world's No. 1 golfer - at least for the moment - said. Phil Mickelson can take over the No. 1 spot in the world golf rankings if he finishes fourth or better on Sunday afternoon at Firestone Country Club in Akron, Ohio.

Woods and the rest of the tour head next week to Kohler, Wisconsin, and the PGA Championship, the last of the four major tournaments for 2010.

Two New York City police officers and five civilians were shot, one of them fatally, at a block party in Manhattan, a police spokesman said.

At about 3 a.m. Sunday, officers responded to an argument atÂ a party in Harlem, Police Commissioner Raymond Kelly said at a news conference.Â A man police identified as Angel Alvarez and another man were arguing, apparently over a woman, Kelly said.

Alvarez shot and killed the other man, and then shot at officers as they approached, he said.

About 270 new wildfires have started in drought-plagued Russia over the past 24 hours, state media reported Sunday, citing the country's emergencies ministry.

"As many as 276 wildfires have been extinguished," the ministry told RIA-Novosti. "Currently, 554 wildfires are raging on an area of over 190,000 hectares."

The setback comes as Moscow chokes in intense smog, with toxic substances at levels several times greater than the norm. State media reports the combination of forest fires and pollutants contributed to the smog.

According to Russia's health and social development ministry, wildfires have killed at least 52 people and left dozens hospitalized.

Hundreds of passengers have been stranded due to delayed flights at the Domodedovo international airport in Moscow. Poor visibility caused by the wildfire smog has prevented airplanes from taking off, said airport officials quoted by the Itar-Tass news agency.

High temperatures in the past several weeks have caused a destructive drought as well as fires that changed the forecast for Russia's grain production.

The situation led the government to impose a temporary ban on exports of grain and grain products, said RIA-Novosti. The trade ban will go into effect August 15.

A string of tornadoes raked through southeastern North Dakota and into west central Minnesota on Saturday night.

Most of the damage was in Richland County, North Dakota, according to Greg Gust, warning coordination meteorologist with the National Weather Service.

"We know of at least three distinct tornadoes that formed in this, possibly more," he said. None of them hit any towns, he said, "although the community of Campbell, Minnesota was very close to being hit."

One of the tornadoes was on the ground for at least 30 minutes. Gust said a typical tornado might last only three to five minutes.

"So to have ones that are tracking for 10 to 15 miles or more are a bit rare, and to have one that's 30 minutes or longer on the ground, that's a pretty sizable and strong tornado," Gust said.

"We do have two farmsteads that were hit pretty hard, one with the house destroyed," he said. "The residents there were in the basement. They are safe. Another farmstead had significant damage on it. No one was home."

The National Weather Service doesn't know yet how strong the winds from the tornadoes were, but the wind was strong enough to break off power lines and damage homes.

"We're aware that one home was pretty much destroyed," Gust said. "So clearly, we're dealing with wind speeds in excess of 100 mph."

The weather service will send a crew to the area Sunday to meet with emergency management officials to assess the damage.