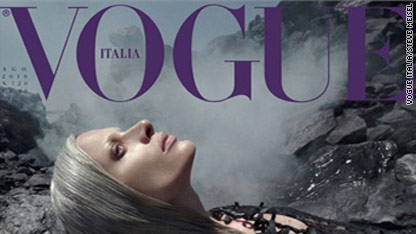 Fashion or offensive? - What does an oil-drenched supermodel blowing black feathers out of her mouth mean? Controversy, baby.

Vogue has apparently attempted to interpret the BP oil spill. A spread called "Water & Oil" in Vogue Italia has hit the stands and struck a chord. Some call it insulting, othersÂ deem it high art. A video shows famous photographer Steven MeiselÂ capturingÂ a gunk-covered Kristen McMenamy lying like a dead bird on black rocks. Newsweek doubts the tastefulness of the spread.Â  ForbesÂ remindsÂ of Vogue's previousÂ stabs at political art. Miami New Times says VogueÂ is out of line, whileÂ The Huffington PostÂ writes that the pics are beautiful.

Which Jodie, again? - No, this isn't about actress Jodie Foster. Stop making that mistake. We're going to tell you about actress Jodie Fisher, the woman whose sexual harassment claim led to HP CEO Mark Hurd's downfall last week. FisherÂ hadÂ beenÂ employed as a contractor for HP working on customer and executive events. She and Hurd, who is married,Â both say they didn't have sex. The company maintains that Hurd, a major figure in corporate America, did notÂ violate its sexual harassment policy, but that heÂ violated its standards of conduct policy.Â HP says HurdÂ filed inaccurate expense account reports to keep his relationship with Fisher secret. HurdÂ probably won't starve. He walked away with $12 million in severance. Fisher, on the other hand, is having her acting chops examined on Jezebel.com.

Moscow smog - The pictures say it all: It's hell to be in Moscow, which is chokedÂ with smog, toxic gases and smokeÂ from wildfires.Â TheÂ mortality rate in Russia's capital has doubled, according to theÂ head of the city's health department.Â Out of 1,500 slots in city morgues, 1,300Â are occupied, the official said. A CNN iReporter who fashioned a face mask out of a dish towel and coat hangerÂ takes viewers on a tour throughÂ the city. He got crafty out of desperation; there's been a run on conventional face masks.

8:23 pm ET September 23, 2021 RETWEET
Dozens of children with non-Haitian passports have been sent to Haiti as part of the US government's massive deportâ€twitter.com/i/web/status/1â€¦Bd
cnni

8:04 pm ET September 23, 2021 RETWEET
The incident at the Port of Houston is an example of the interest that foreign spies have in surveilling key US marâ€twitter.com/i/web/status/1â€¦nU
cnni