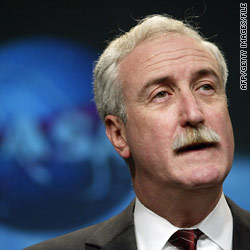 Sean O'Keefe, who resigned as NASA administrator in February 2005, survived the crash.

[Updated at 7:28 p.m.] The latest developments in the plane crash Monday night near Dillingham, Alaska:

- The Alaska Department of Public Safety Tuesday released the names of
those killed and injured in the crash:

- Former U.S. Sen. Ted Stevens was one of five people killed in the crash, said Mitch Rose, his former chief of staff and a family spokesman.

- Alaska's FAA office said two survivors had serious injuries and two had minor injuries, and it said the flight had departed from GCI Lodge on Lake Nerka and was headed to Dillingham.

- The four who were injured were flown to Anchorage hospitals.

- The nine people aboard the plane were headed on a fishing trip, said Matthew Felling, an anchor and reporter for television station KTVA.

- The crash was in a remote, hard-to-reach location, and that reaching it was further hampered by inclement weather, state police spokeswoman Megan Peters said.

- The Alaska Air National Guard and U.S. Coast Guard arrived at the crash site and are providing medical support to the victims, authorities in Alaska said.

- The National Transportation Safety Board is investigating the crash.

- Inclement weather was reported in the area at the time of the crash, the National Guard said.

- The plane was a DeHavilland DHC-3, according to the FAA. It was registered to GCI Communications Corp., based in Anchorage, Alaska.

- "Though small of stature, Ted Stevens seemed larger than life. For he built Alaska. And stood for Alaska. And he fought for Alaskans," Alaska Gov. Sean Parnell said at a news conference. "How can we summarize six decades of service?"

- "Alaska and the nation he so loved have lost a great man," Stevens' family in a statement. "We have lost a tremendous husband and father and grandfather. He loved Alaska with all his heart. He was a guiding light through statehood and the development of the 49th state. Now that light is gone but the warmth and radiance of his life and his work will shine forever in the last frontier. His legacy is the 49th star on the American flag."

- President Obama extended his condolences to the families, including that of Stevens, who flew in support of the Flying Tigers in the Pacific Theater in World War II. "A decorated World War II veteran, Senator Ted Stevens devoted his career to serving the people of Alaska and fighting for our men and women in uniform," Obama said in a written statement.

- Ralph D. Crosby Jr., chairman of EADS North America, said, "It was with a great sense of relief and gratitude that we learned that Sean, and his son, Kevin, survived the aircraft crash in Alaska. We extend our deepest sympathy to the families of those less fortunate in this terrible accident. We owe a debt of gratitude for the heroic efforts of the members of the rescue crew and others who rushed to the scene."